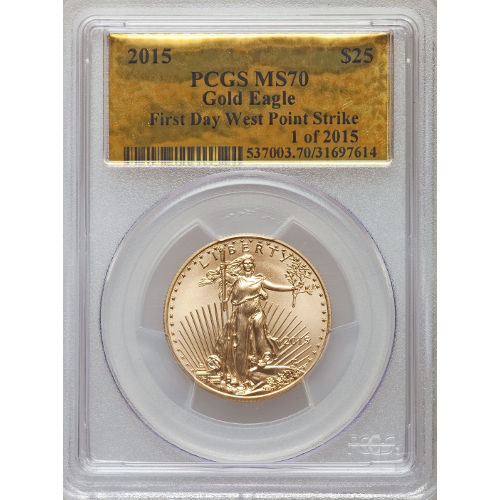 One of the worlds most in-demand coins is the American Gold Eagle. The official gold bullion coin of the United States, it is one of the few national gold coins struck in 22-karat gold rather than 24-karat gold. The coin is the counterpart of the American Silver Eagle program, though each program uses unique designs on its obverse and reverse sides. You can now purchase a 2015 oz American Gold Eagle from JM Bullion with an MS70 grade from the Professional Coin Grading Service.

When the American Gold Eagle bullion coin was introduced in 1986, more than 3.5 million coins were struck across the programs four weights. Although the most popular coin in the series has long been the 1 oz coin, the oz, oz, and 1/10 oz coins have often battled closely for second place behind the 1 oz coin in the heart of numismatics. The programs production levels have varied wildly over the years, reaching low production levels from 1993 to 1996 before rebounding at the close of the 20th century. In the latest production year, roughly 46,000 oz American Gold Eagles were struck.

The 2015 oz American Gold Eagle for sale today comes with an MS70 grade from the PCGS, meaning the coin is considered perfectly struck. The Gold Foil Label included inside the sealed packaging with your purchase today features information such as the face value of the coin, year of minting, grade, grading service, and serial number for the coin.

On the obverse side of these coins is Augustus Saint-Gaudens image of Lady Liberty. Her image, as it appears on this coin, was first designed in 1907 by Saint-Gaudens. He never lived to see it struck onto the $20 Gold Double Eagle, but his image lives on today on the American Gold Eagle. The reverse bears Miley Busieks depiction of a family of nesting bald eagles.

The United States Mint was founded in 1792, following passage of the Coinage Act of 1792 by Congress. The West Point Mint in New York bears the primary responsibility for producing American Gold Eagle coins.

If you have questions about these coins, we encourage you to share those inquiries with a JM Bullion associate at 800-276-6508, online using our live web chat, or via email.