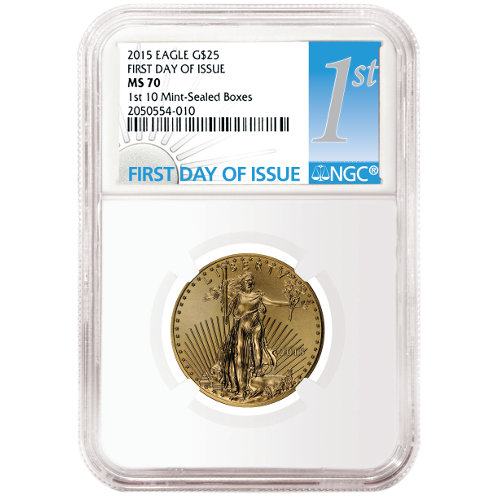 The American Gold Eagle coin isnt typically classified as a rare or hard-to-find coin. In 2014, a total of 1.14 million bullion coins were struck, with thousands more proof and uncirculated coins produced as well. When a coin is struck on the first day of minting and shipped in the first 10 boxes from the US Mint, availability is limited and the demand goes up. Today, you can purchase a 2015 oz American Gold Eagle with MS70 grade from the Numismatic Guaranty Corporation through JM Bullion.

These 2015 oz American Gold Eagles received a Mint State 70 grade from the NGC. Coins with an MS70 grade are difficult to find in large numbers because each one is considered a perfect strike, something that does not happen often in high-volume coin production. These particular coins have limited availability because they were struck on the first day of 2015 production, and left the US Mint in the first 10 boxes.

American Gold Eagle coins are struck each year in 1 oz. weights, as well as three fractional weights: oz, oz, and 1/10 oz. If the grade and limited availability of these First-10 box coins wasnt enough to drive demand, the volume of oz American Gold Eagles produced should be. In 2014, just 46,000 coins were struck. Production levels for the oz coin is generally very low compared to the other weights.

On the obverse side of each coin is a depiction of Lady Liberty as designed by famed artist Augustus Saint-Gaudens. He is credited with reviving American coin design in the early 20th century, though he passed away before his Lady Liberty ever appeared on coins. Miley Busiek designed the bald eagle imagery used on the reverse.

The United States Mint, founded in 1792, is one of the oldest in the Western Hemisphere. The Mint produces the bulk of its American Gold Eagle coins at the West Point Mint facility in New York.

We encourage all numismatics to ask questions when they arise. If youd like to speak with a JM Bullion associate, you can reach one at 800-276-6508, or connect with one online using our live web chat and email services.