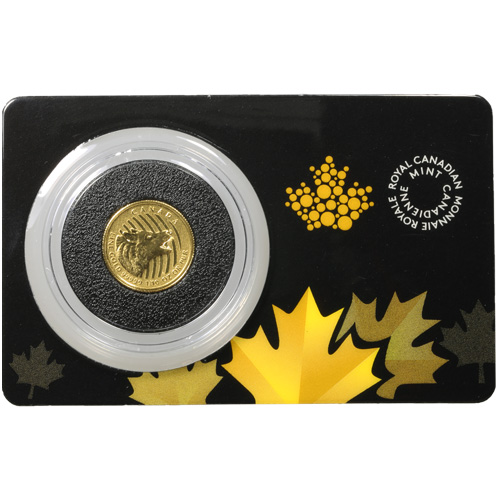 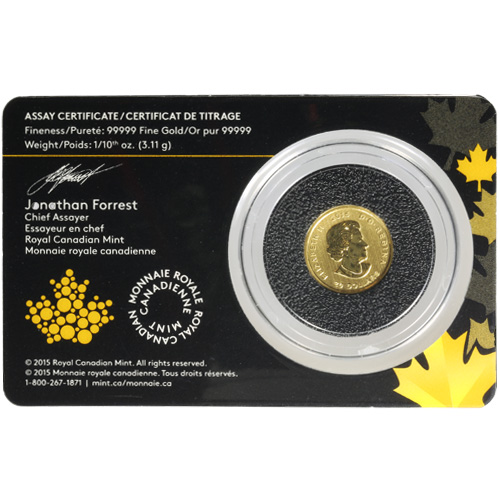 The Call of the Wild Series was introduced by the Royal Canadian Mint in 2014 with the Howling Wolf design. These coins are highly coveted by investors because of the RCMs distinctive use of .99999 pure gold content in each coin. Originally offered in 1 oz gold, the mint expanded to offer 1/10 oz coins in the series in 2015. Right now, 2015 1/10 oz Canadian Gold Howling Wolf Coins are available to purchase online from JM Bullion.

Each of the 2015 1/10 oz Canadian Gold Howling Wolf Coins in this product listing comes to you in Brilliant Uncirculated condition. The coins are housed within protective card packages that include assay information on the specimen. If you flip the protective card over, youll find that the assay includes the weight, purity, and metal content of the coin, along with the signature of the Chief Assayer of the Royal Canadian Mint.

The Call of the Wild Series is the purest gold coin collection from the Royal Canadian Mint. The primary option is a 1 oz gold coin issued with one new design annually. Available designs since 2014s introduction with the Howling Wolf include the Growling Cougar in 2015, the Roaring Grizzly in 2016, the Bugling Elk in 2017, the Screaming Golden Eagle in 2018, and the Moose in 2019.

On the obverse side of all 2015 Canadian Gold Howling Wolf Coins is the effigy of Queen Elizabeth II. Her Majesty is featured here in right-profile relief in a design created in 2003 by Susanna Blunt for the Royal Canadian Mint. It is just the second design for Canadian coins ever created by a Canadian artist and represents the fourth-generation effigy of the Queen for Canadian coins.

The reverse face of 2015 1/10 oz Canadian Gold Howling Wolf Coins includes the image of a wolfs head in left-profile relief. The wolf has its head slightly tilted toward the sky and its mouth open slightly as it howls toward the heavens. That howl is represented in physical form by the radiating lines in the background. This design element is found on all releases in the series.

The Royal Canadian Mint is the official sovereign mint of Canada. While it produces all of its circulation currency at the Winnipeg Mint, the original facility at the Ottawa Mint produces all gold bullion coinage such as this.