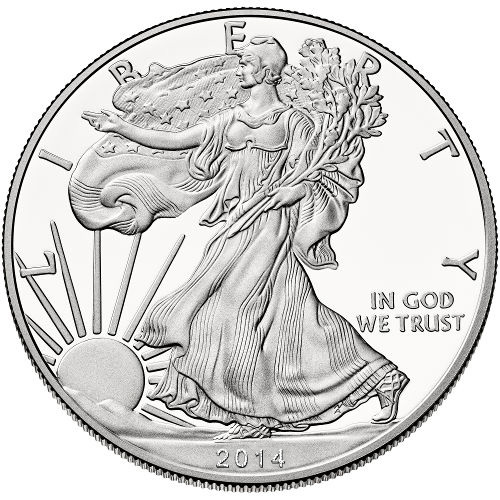 Although sales records had been smashed multiple times in recent years, five times in the last seven to be precise, 2014 was one of the most important years in the American Silver Eagle program for a number of reasons.

For the 2014-W Proof American Silver Eagle, it was business as usual. While the mintage of 745,394 marked a third year of declining mintage, levels were still near all-time highs and the coin’s mintage level was still within the same 50,000-coin range it had enjoyed since 2004.

Walking Liberty continues to grace the obverse face of all American Silver Eagle coins. Adolph A. Weinman’s creation debuted on the Walking Liberty Half Dollar in 1916, and remained the primary design on that coin until 1947.

US Mint Chief Engraver John Mercanti designed the heraldic eagle on the reverse. A modern interpretation on the original heraldic eagle, Mercanti’s design has clean, crisp lines and features the addition of 13 stars above the eagle to represent the original American Colonies.

If you have questions, please don’t hesitate to contact JM Bullion. Our associates are available at 800-276-6508, online using our live chat, or via email.