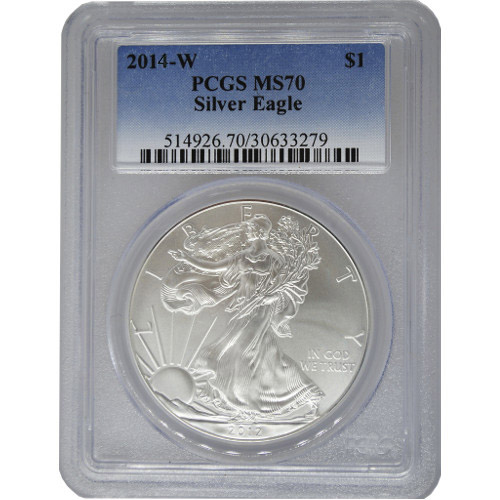 To date, the second-year issue of the Burnished Silver Eagle remains the highest mintage year for the coins. With 621,333 coins struck that year, the 2014 Burnished Silver Eagles come in with a mintage figure nearly one-third of that level. In 2014, the United States Mint produced just 253,169 of the burnished coins in this collection.

All 2014-W 1 oz Burnished American Silver Eagle Coins listed here are considered perfect specimens by the PCGS. Coins that earn the Mint State 70 certification have full, original mint luster and lack all detracting flaws on the surface areas of the design.

The obverse of the Burnished American Silver Eagle coin features the image of Walking Liberty. One of the greatest American coin designs ever, this image captures Liberty as she walks toward a setting sun on the horizon. Created in 1916 by Adolph A. Weinman, it originally appeared on the Walking Liberty Half Dollar Coin from 1916 to 1947.

On the reverse of the 2014-W 1 oz Burnished American Silver Eagle is the heraldic eagle of the United States. First designed in 1794 on original American coins from the Philadelphia Mint, this is the latest update of the design. Completed in 1986 by John Mercanti, it depicts the American bald eagle set behind the national shield.

Please feel free to reach out to JM Bullion if you have questions. Our customer service team is available to you at 800-276-6508, online using our live chat, and via our email address.