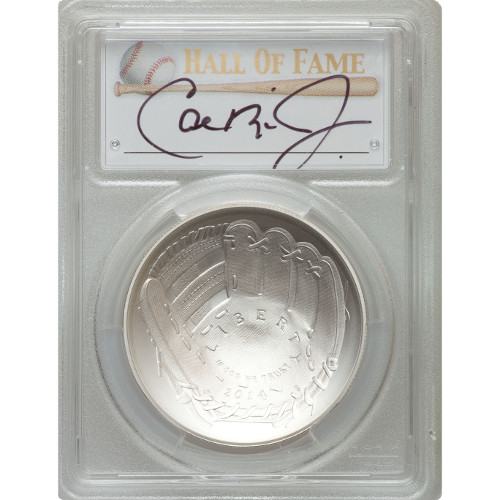 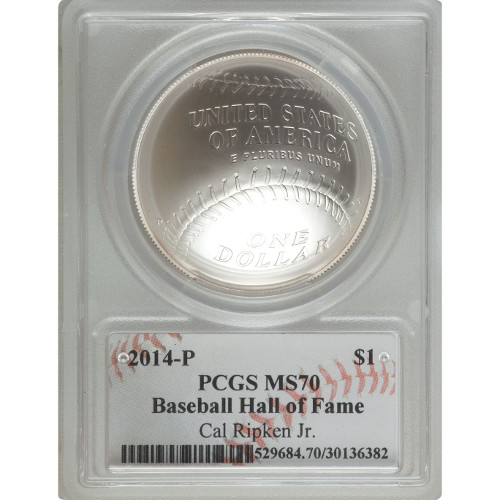 The Baseball Hall of Fame honors the games greatest players from more than a century of organized competition in the United States. As the nations oldest professional sports organization, baseball is widely regarded as the national pastime of America. Today, you can purchase a 2014 $1 Baseball Hall of Fame Silver coin from JM Bullion with a special Cal Ripken signature label and an MS70 grade from the PCGS.

Cal Ripken was baseballs Iron Man, playing in a record-breaking 2,692 consecutive games at one point during his career. His longevity and reliability helped him set that mark and break Lou Gehrigs 56-year-old record that many believed would never be matched. Ripken is the son of Cal Ripken Sr., who played and managed in the Baltimore Orioles association during his own career.

This 2014 $1 Baseball Hall of Fame Silver Coin has been graded MS70 by the Professional Coin Grading Service, indicating the coin is considered perfectly struck. The P mint mark signifies the coins were struck at the Philadelphia Mint. The Cal Ripken label included in the packaging of this coin bears his player photo, name, and a reproduction of a signature.

On the reverse side of each coin is the 3D rendering of a baseball, complete with the stitching and engravings United States of America and E Pluribus Unum. The design on this side is the first-ever curved design on a US Mint coin. The obverse side shows the open palm of a baseball glove, with engravings of Liberty, In God We Trust, and 2014 inside the mitt.

The US Mint held an open contest among designers and artists to gather concepts for the Baseball Hall of Fame coin series. Cassie McFarlands design was chosen to appear on the coins on September 4, 2013.

If you have questions for the JM Bullion staff about these Baseball Hall of Fame Coins or any of our other products, we invite those inquiries at 800-276-6508. You can also get in touch with us online via live chat and email.