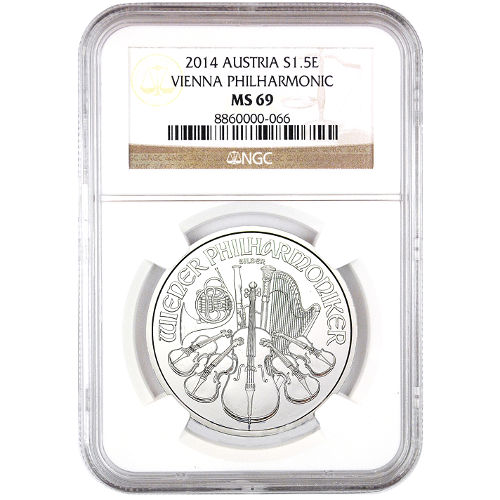 The 2014 Austrian Silver Philharmonic coin is now available in near perfect MS69 condition. Each coin from this offering has been certified by the NGC to be in MS69 condition. The Silver Philharmonic has been struck in 1 troy ounce of .999 fine silver and has a 1,50 Euro face value. These coins will be shipped in their original NGC coin slabs which displays the coin’s grade, minting year, and country.

Music has always been a part of the charm and allure of Europe. All across the Old World, concert halls and smaller venues have played host to many of the world’s greatest classical music performers. The Austrian Mint honors the Vienna Philharmonic each year with a 1 oz silver bullion coin. This coin has become one of the most popular silver bullion products minted around the world each year. The 2014 Austrian Silver Philharmonic coin, which is NGC certified, retains the popularity of the coins that came before it in the series.

The Vienna Philharmonic was founded in 1842 and is widely considered among the finest orchestras in the world. The group, which is based in Musikverein, Vienna, Austria, is comprised of members of the orchestra of the Vienna State Opera. On one side of the coin, the Great Pipe Organ from Vienna’s Golden Concert Hall is featured in beautiful detail. The hall is home to the Vienna Philharmonic Orchestra. The phrase “Republik Osterreich” is engraved above the hall, while the phrase “1 Unze Feinsilber” (one ounce pure silver) is engraved below. There are also engravings representing the year of minting and the face value (in euros) of the coin.

On the opposite side of the 2014 Austrian Silver Philharmonic is the ever-popular design featuring the bouquet of instruments used by the members of the orchestra. Included in the image are violins, a cello, harp, and brass instruments. Also inscribed on this side of the coin are the words “Wiener Philharmoniker” which is engraved above the image of the instrument bouquet.

This 2014 Austrian Silver Philharmonic coin is NGC certified and produced by the Austrian Mint. The mint is located in Vienna, Austria, and is tasked with minting all Austrian coins. As of 1989, the Vienna Mint is a public limited company and serves as a subsidiary of the National Bank of Austria. Prior to 2002, the mint produced the official currency of Austria, the Austrian schilling. Following the nation’s entrance into the European Union in 2002, the Mint has been responsible for producing Austria’s euro coins.