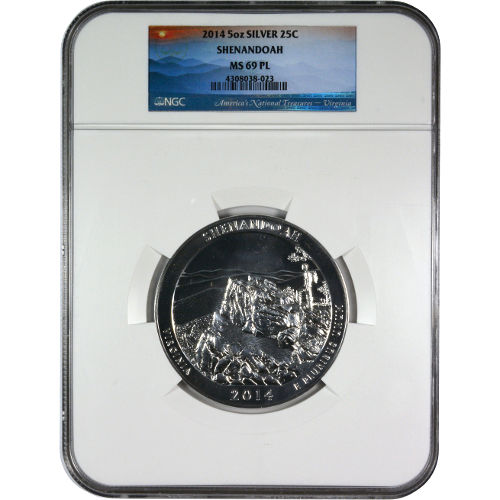 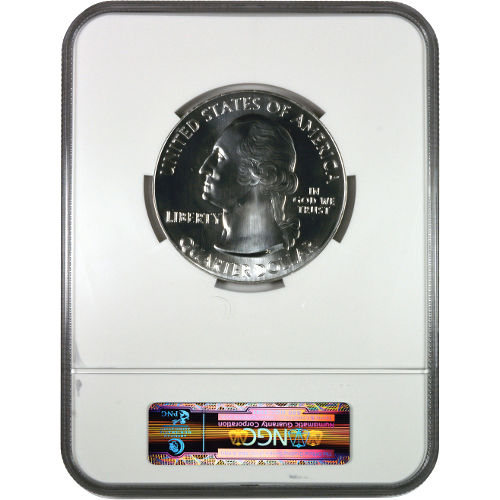 The America the Beautiful series of silver coins from the United States Mint are produced annually in both bullion and proof versions. These unique coins are based upon the state quarters program and represent the nation’s commitment to its national parks, forests, and monuments. The 2014 5 oz ATB Shenandoah Silver Coin is now available from JM Bullion in near-perfect condition.

Each of the 2014 5 oz ATB Shenandoah Silver coins in this JM Bullion product listing has a grade of MS69 from the NGC. Considered a near-perfect specimen, these coins have full, original luster and a maximum of two minor detracting flaws. These detractions are minuscule in nature and limited to the outer edges of the coin.

On the reverse face of the coin you’ll find the image of the beautiful Shenandoah Valley, as seen by a hiker standing at the edge of a cliff. Engravings include the state represented, the park depicted, and the year of issue.

The obverse bears the left-profile portrait of President George Washington. The first elected president and Commander-in-Chief of the United States was originally captured in a bust by William Cousins in 1786, and his image has appeared on American quarters since 1932.

America the Beautiful coins are released in groups of five each year, featuring new designs on each coin. The program will represent all 50 states, five territories, and the federal district when it is completed.

Please direct any questions you might have about these coins to a JM Bullion customer service representative. You can reach us at 800-276-6508, online using our live chat, or via our email address. If you are looking for similar products, check out our selection of Certified America the Beautiful Coins.