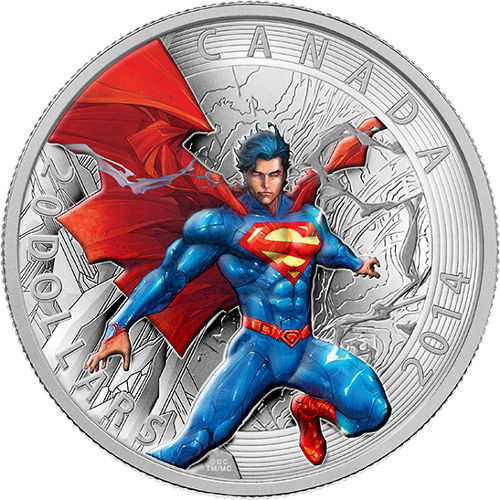 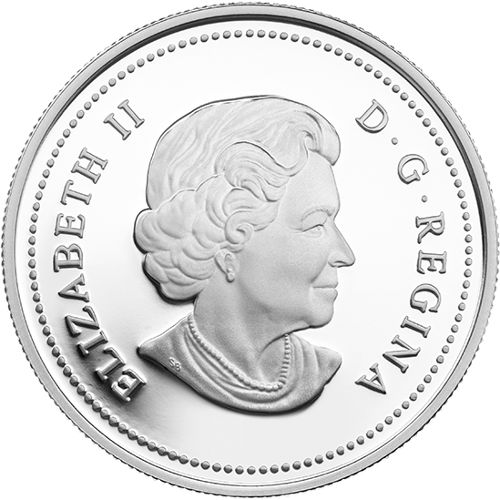 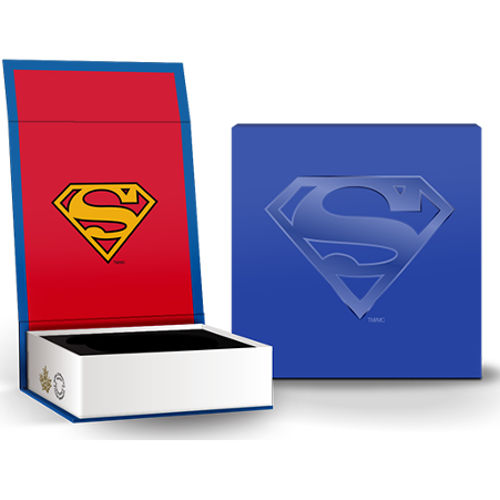 The 2014 1 oz Iconic Superman $20 Canadian Silver Proof Coin has been produced by the Royal Canadian Mint for their Superman themed fine silver coin series. Each coin has been struck in 1 troy ounce of .9999 pure silver and has a face value of $20 CAD. These coins will be shipped in their original RCM packaging which includes a Superman themed display box with a serialized COA.

When fans of graphic novels think about freedom and justice, the image of Superman no doubt pops into their mind. The Royal Canadian Mint pays homage to the Man of Steel on the 2014 1 oz Iconic Superman Canadian Silver Proof coin. The image on the coin is modeled after the cover of the Superman Annual #1 which was released in 2012. In this image, Superman is shown in full color against the silver background.

The Royal Canadian Mint used some of the most iconic images of the Man of Steel from the graphic novels in the production of its Superman coin series. The 2014 1 oz Iconic Superman Canadian Silver Proof coin features an image of the superhero bursting forth from the coins background. His confident pose is highlighted by the bright blue of his suit and the brilliant red of his famous cape. Included on this side of the coin are the following engravings: Canada, 20 Dollars, and 2014.

On the opposite side of the coin is the right-profile portrait of Queen Elizabeth II as designed by Canadian artist Susanna Blunt. Queen Elizabeth IIs image is flanked on the left and right by the engravings Elizabeth II and D.G. Regina, respectively. The term D.G. Regina is short for the Latin phrase Dei Gratia Regina. In English, this phrase translates to By the Grace of God, Queen.

The Royal Canadian Mint was established in 1908 to help process and refine gold, silver, and other precious metals. The primary impetus for its construction was the wealth of gold found during the gold rush in the Yukon Territories beginning in the late 19th century. Today, the mint is responsible for producing both commemorative and circulation coinage for the Government of Canada.

If you have any questions about the 2014 1 oz Iconic Superman Canadian Silver Coin or any of our other products please call us at 800-276-6508. As an alternative, our staff is also available to provide assistance via live chat and email. Be sure to take a look at our full selection of Canadian Silver Coins for more unique offerings from the RCM.