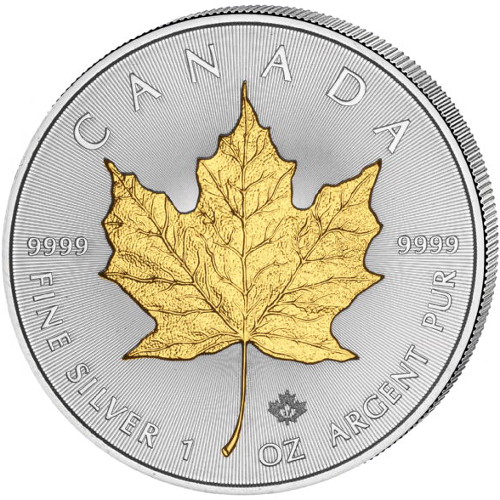 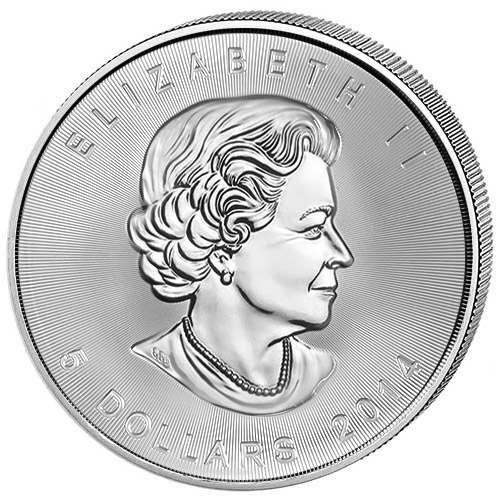 The Royal Canadian Mint introduced the Canadian Silver Maple Leaf in 1988 alongside the debut of its Canadian Platinum Maple Leaf. The coins of the Silver Maple Leaf Series are routinely among the best-selling silver coins in the world, often behind only the American Silver Eagle.

The obverse of the 2014 Canadian Silver Maple Leaf Coin includes the latest-generation portrait of Queen Elizabeth II. This right-profile effigy of the Queen was created in 2003 by Susanna Blunt. The portrait is just the second-ever designed by a Canadian artist and is the first since the reign of King George VI to depict a monarch without a crown on the head.

On the reverse face of 2014 1 oz Canadian Silver Maple Leaf Gilded Coins, you will find the iconic sugar maple leaf. Created in 1979 by Walter Ott, this singular design of the sugar maple is featured on the gold, silver, platinum, and palladium versions of the Canadian Silver Maple Leaf in every year of availability. The sugar maple leaf on this version of the coin has an application of 24-karat gold that helps it visually stand out from the other elements of the coins design.

Both sides of this coin have the Royal Canadian Mints radial lines in the background, with a micro laser-engraved maple leaf privy mark included on the reverse field that bears the 14 digits from the date mark.

These 2014 1 oz Canadian Silver Maple Leaf Coins are individually packaged inside of protective plastic capsules with each coin available in Brilliant Uncirculated condition.

JM Bullion customer service is available to you at 800-276-6508 to answer questions. You can also connect to us on the web through our live chat and email address features.