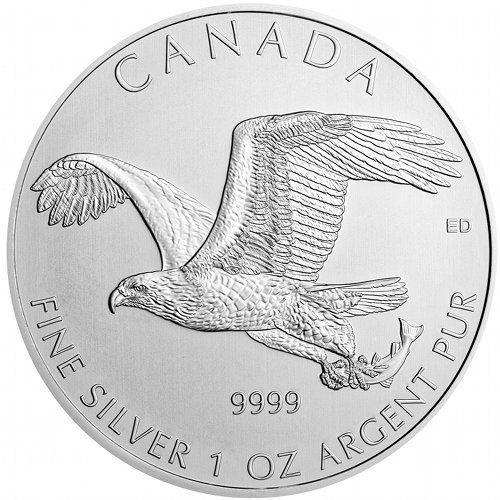 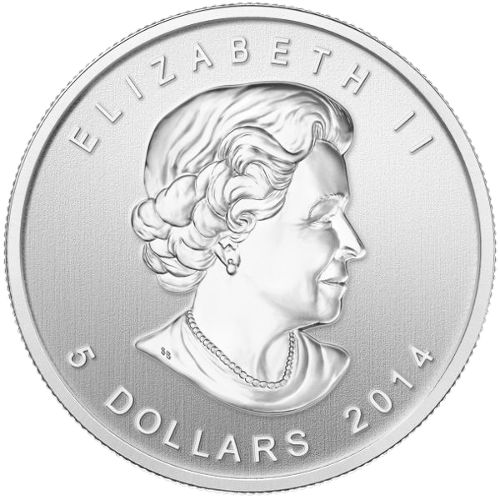 This 2014 Canadian Silver Bald Eagle coin was released by the Royal Canadian Mint as the second installment in its “Birds of Prey” series. Its mintage was limited to only 1,000,000 pieces, making it a highly coveted piece among the coin collecting community.

Each of these stunning 1 oz coins has been minted from the finest 99.99% pure silver and holds a face value of $5 CAD. All coins included in this stunning collection are guaranteed to arrive in brand new uncirculated condition. As a protective measure, individual coins will be carefully packed in protective sleeves, while larger orders will be shipped in their original sealed tubes.

In continuance with its tribute to the winged predators of Canada, the “Birds of Prey” series turns its attention to the bald eagle for its second coin. Although commonly thought of as the US’s national bird, this majestic creature is also quite prevalent up north, where it can often be seen soaring through Canada’s clear skies.

The eagle has been prominently displayed on the obverse of the coin with its wings spread in flight. In its talons, the predator holds a fish, which it undoubtedly snatched from a brook or stream for its most recent meal. Avian enthusiasts will find themselves impressed by the accurate depiction of this fierce fowl from the dynamic positioning of its flapping wings to the textured pattern of its feathers. Also engraved on the front side are the coin’s weight, purity and the name “Canada.”

The reverse side of the coin honors Canada’s history with an effigy of Elizabeth II. This portrait serves as a tribute to Canada’s former status under British rule. Encircling the Queen is a border of text, which includes her name along with the coin’s denomination and mintage year.

With the release of its second coin, the “Birds of Prey” series continues to generate great interest from both collectors and wildlife enthusiasts alike. If you would like to learn more about this 2014 Canadian Silver Bald Eagle Coin, give us a call at 800-276-6508. You can also reach us through live chat or online forms. As a customer courtesy, all orders will receive complimentary insurance on all orders, and shipping on orders over $199.

Mary from MI - July 07, 2015
"All I can say is the last 2 yrs with this company has been a pleasure.I haven't any problems. I really like the quality of your service. And Thanks Again!"

Roland from PA - February 28, 2015
"These are much nicer in person quality products from a Canadian mint Perfect transaction as always beautiful coins great price great service thanks keep up the good work JM"

Shannon from MI - October 22, 2014
"The details in this coin are amazing. One troy ounce of four-nine fine silver and awesome to look at. How can you go wrong with the purchase?"

Ronald from CA - September 21, 2014
"What the Canadian mint is doing with their "bullion" coins should be adopted by the U.S. mint. By minting unique coins each year, they are guaranteed to become collectable. There won't be a Canadian Bald Eagle 2015 issue, so once they stop minting these, that's it. I am not interested in buying U.S. Liberty coins based upon the date of issue, each year is just the same old thing. Rarity, mint marks...eh. They have become boring....like always ordering vanilla ice cream. No change from year to year. Just my humble opinion."

Alfred from MI - August 25, 2014
"I have been buying your silver products for a few months now and have been very happy with your pricing,shipping and quality of the coins that I have received .The coins that I have purchased have all surpassed expectations. However the pictures portraying these coins have been well below the actual coins themselves. The actual coin is what keeps bringing me back to order more pieces of fine workmanship to share with my friends and family alike.I will be looking forward to my next purchase as I know I won't be disappointed ."