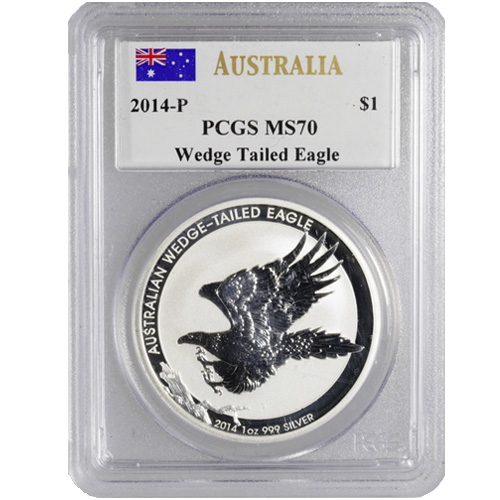 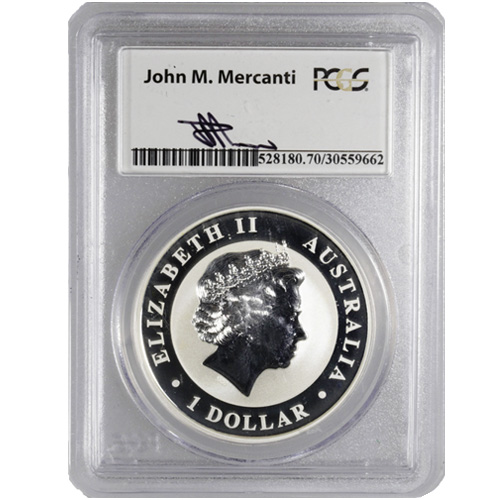 The Australian Wedge Tail Eagle is as close as youre going to come to an answer to the majesty of the American Silver Eagle. The coin series was introduced by the Perth Mint in 2014 and became so popular, so fast, that it is actually the mints third-best-selling silver coin program at the moment. Demand is so high for the series that the Perth Mint even abandoned mintage caps on the 1 oz silver coin after its debut issue. Right now, perfect condition 2014 1 oz Australian Wedge Tail Eagle Silver Coins are available to purchase online from JM Bullion.

Each of the 2014 1 oz Australian Wedge Tail Eagle Silver Coins available here comes with a perfect certification from the PCGS. Coins with a Mint State 70 grade exhibit full, original mint luster and bear no detracting flaws on the designs or surface areas of the coin.

Mr. Mercanti spent the vast majority of his career as an artist at the United States Mint. Beginning as an apprentice and young designer at the Philadelphia Mint in the 1970s, Mr. Mercanti contributed to a wide range of American bullion coin programs. This includes the heraldic eagle reverse on the American Silver Eagle coins issued 1986 to 2021. Mr. Mercanti also finished his vaunted career at the US Mint serving as the 12th Chief Engraver of the US Mint from 2006 to 2010.

Queen Elizabeth II features in the obverse design of 2014 Australian Wedge Tail Eagle Silver Coins. This design was created in 1998 by Ian Rank-Broadley and was widely used across British, Australian, and New Zealand-issued bullion coins. In the portrait, the Queen is shown in right-profile relief.

A powerful wedge tail eagle soars through the reverse design element of the 2014 1 oz Australian Wedge Tail Eagle Silver Coin. The eagle is shown with its wings flexed out wide and its talons reaching forward as it soars toward its perch on the edge of the design field.

If you have any questions, we encourage you to contact JM Bullion customer service. Our team is available at 800-276-6508, online using our live chat, and via our email address.