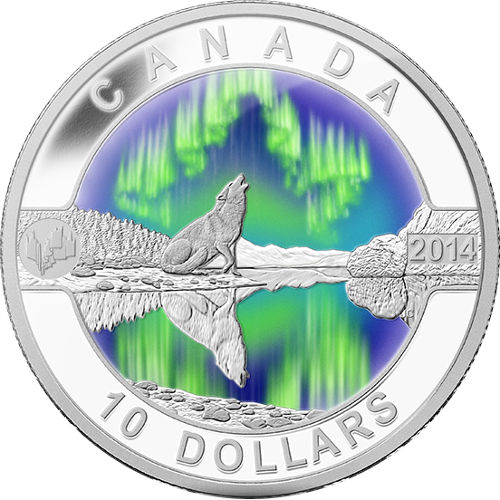 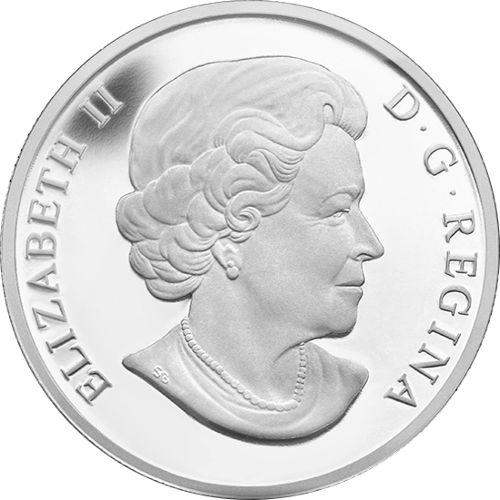 The 2014 1/2 oz Northern Lights $10 Canadian Silver Coin has been produced by the Royal Canadian Mint as the 9th addition to their popular O Canada series. Each coin is struck in 1/2 troy ounce of .9999 fine silver and has been given a face value of $10 CAD. These coins will ship in their original RCM maroon clamshell display box accompanied by a numbered COA.

One of the most stunning coin series ever produced by the Royal Canadian Mint is the O Canada series of silver coins. The series features a number of iconic images that citizens around the globe associate with Canada. From the majestic Rocky Mountains to impressive wildlife shots of cowboys and bison, the O Canada series has spawned some memorable coins. The 2014 1/2 oz Northern Lights $10 Silver Canadian coin ranks among the most impressive coins in the 10-coin series.

The Northern Lights coin was the 9th coin in the O Canada series to be released to the public. The coin includes the unique shimmering, colorful appearance of the aurora borealis. While the majority of the coin is pure silver in appearance, the aurora borealis featured in this coin uses hues of blue, purple, and green to create the life-like appearance of the Northern Lights.Included with the image are the words Canada and 10 dollars stamped above and below, respectively. In the foreground, a lone wolf is seen howling at the shoreline of a pristine lake.

The opposite image on the coin is the classic image of Queen Elizabeth II that graces a number of Royal Canadian Mint coin series. The image includes the phrase D.G. Regina, which is short for the Latin phrase Dei Gratia Regina. Translated into English, the phrase means By Grace of God, Queen.

The Royal Canadian Mint is responsible for producing circulation and commemorative coins for the government of Canada. The mint was first opened following the discovery of gold in the Yukon Territories. At that time, gold bullion was produced in massive quantities to help Great Britain repay its World War I debts. Today, the mint belongs to the Government of Canada.

If you have any questions about the 2014 1/2 oz Northern Lights $10 Canadian Silver Coin or our other products, please call us at 800-276-6508. Alternatively you can reach a member of our support staff via live chat and email. Be sure to view our full selection of Royal Canadian Mint coins for more unique items.