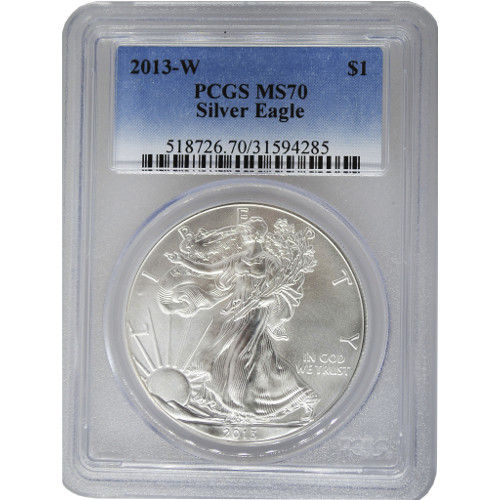 A coin with a Mint State 70 grade is considered perfectly struck. You will find no contact marks, hairlines, or other flaws on the surface of these coins. When the PCGS certifies a coin as MS70, it adds instant value to the coin. Like its competitors, the PCGS uses the Sheldon numeric scale to grade coins, on which a 70 is the highest possible grade. PCGS Burnished Silver Eagles after 2006 may contain SP designations as well!

American Silver Eagle coins were authorized for production by Congress following passage of the Liberty Coin Act in 1985. By law, the coins must be struck using only silver sourced from within the United States. The original supply for this program came from silver stores in the Defense National Stockpile. A 2002 extension granted to the program by Congress permitted the Treasury Department and Mint to purchase additional silver stores, as long as silver was still sourced from within the country.

Burnished American Silver Eagle coins are struck in a process that includes using burnished blanks in coining presses. The blanks, or planchets, are hand loaded into the presses and struck with dies to produce a stunning satin finish that makes these coins great for display and exhibition. Adolph A. Weinmans Walking Liberty and John Mercantis heraldic eagle appear on the obverse and reverse sides of the burnished coins, respectively.

The United States Mint strikes all Burnished American Silver Eagles at the West Point Mint, as indicated by the W mint mark on the reverse of each coin. Each coin contains .999 fine silver and has a face value of $1.

JM Bullion wants you to feel comfortable with your purchase today. If you have questions about these coins, dont hesitate to call us at 800-276-6508, connect with us through our live web chat, or send us an email.