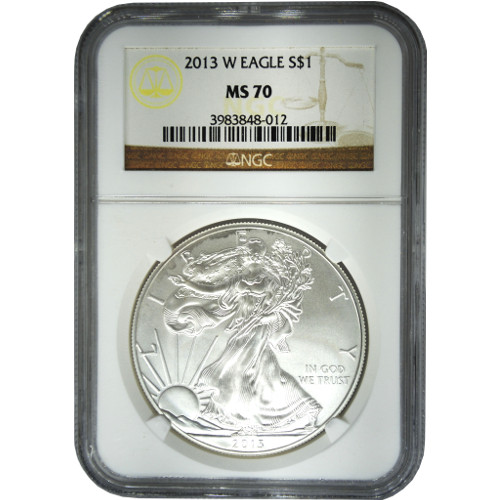 Its hard to image a coin in the most popular series in the world as rare, but the Burnished American Silver Eagle is a coin that can be hard to find. The uncirculated series from the United States Mint was first introduced in 2006, and by 2013 production levels had sank to roughly 200,000 annually. In a coin series that features more than 30 million coins in the bullion program, 200,000 is a drop in the bucket. Right now you can obtain a 2013 Burnished American Silver Eagle with MS70 certification from the Numismatic Guaranty Corporation courtesy of JM Bullion.

Each of the coins available through this product listing features a burnished design. The Mint introduced these coins with a satin finish to enhance the visual appeal of the coin, making it a must-have among numismatics looking for a display or exhibition coin. These coins feature burnished blanks that are struck by the US Mints dies to create a unique appearance to the coin. In this case, burnished does not refer to a condition on the coin, but rather a process used in production.

These 2013 Burnished American Silver Eagles have perfect MS70 grades from the NGC, indicating that each is considered a perfectly struck coin. Mint State 70 coins have no visible contact marks, blemishes, or other flaws.

On the obverse side is Adolph A. Weinmans Walking Liberty Creation. Weinman, a student of famed artist Augustus Saint-Gaudens, developed his image in 1916 for use on the Walking Liberty Half Dollar. On the reverse is John Mercantis heraldic eagle. Mercanti, a US Mint chief engraver, created the heraldic eagle in 1986 for this coin series.

The United States Mint strikes all American Silver Eagle coins using .999 fine silver that has been sourced from within the US. Each of the burnished coins bears a $1 face value, even though they are not intended for circulation.

JM Bullion welcomes all of your questions about Burnished American Silver Eagle coins. Please direct your inquiries to our team members via telephone at 800-276-6508, or connect with us online through live web chat and email.