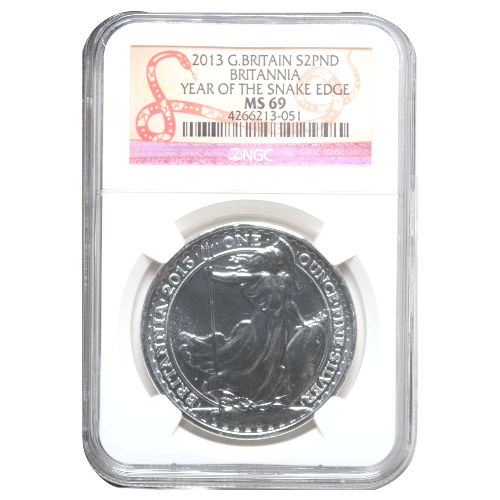 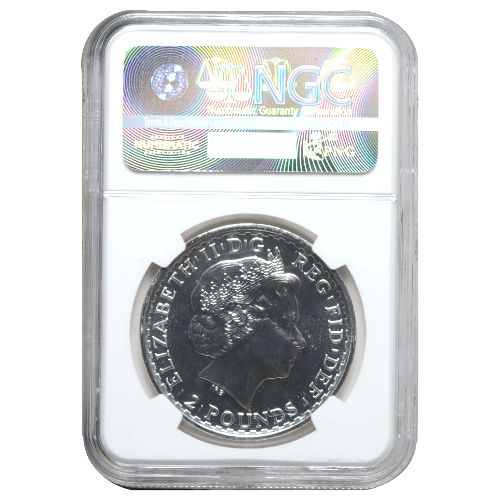 Following the success of the Perth Mints Lunar Coin series from 1996 to 2007, production facilities around the world have churned out Lunar Series coins, or sovereign coins with Lunar themes, for investors and collectors. The 2013 1 oz British Silver Snake Coin was produced at the Royal Mint of London, and is now available to you through JM Bullion.

This coin was released one year before the Royal Mint unveiled its brand-new Lunar Coin Series. The Lunar Coins feature primary design sets with animals from the Zodiac, or Chinese Lunar Calendar. In honor of the Year of the Snake, the Royal Mint took a bold step with its sovereign Silver Britannia coin.

On the edge of each coin, the Royal Mint struck a small snake. This was the first time the Mint had ever produced a coin with design features on the outer rim of any of its coins. On the reverse face of the coin is Philip Nathans traditional image of Britannia. An ancient figure believed to guard the British Isles from mainland European aggressors, the goddess is depicted with a Corinthian helmet on her head, trident in her right hand, and a shield in her left that is emblazoned with the Union Jack.

The obverse side of each coin bears the right-profile image of Queen Elizabeth II found on all Royal Mint coins. Her portrait was designed by Ian Rank-Broadley, and features engravings around it that read Elizabeth II, DG, RegFidDef, and the coins face value. A small IRB, for the designer, can be seen below the Queens bust.

The United Kingdoms Royal Mint is perhaps the oldest operating facility in the world, having been originally founded as the London Mint in 886. If you have questions about these coins for a JM Bullion associate, dont hesitate to contact us at 800-276-6508. You can also connect with us online through our live chat and email services. If you are interested in similar products, be sure to check out our full selection of British Silver Coins.

Thomas Mark from FL - June 02, 2015
"Just ordered 3 for myself... I already know the quality will be top notch as JMB is always on top of their game! Like the MS70 Britannia offered earlier this year, these are being sold for under $50; today on eBay to get one of those 2015's - would cost at least $350! I put my money on JM Bullion as they offer unparalleled service."