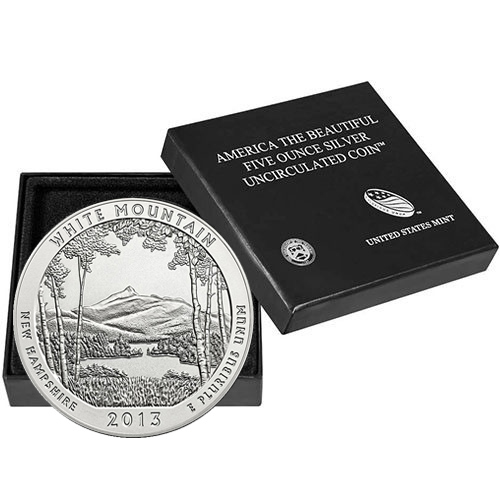 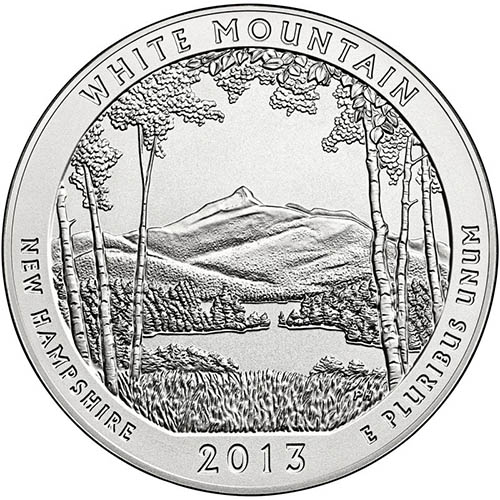 As the fourth year of the America the Beautiful Series got underway at the United States Mint, one of the smallest states in the nation featured in the designs released. The 2013 White Mountain Silver Coin represents New Hampshire in the northeast and features the image of one of the highest peaks in the Appalachian Mountain range. Right now, 2013-P 5 oz Burnished ATB White Mountain Silver Coins are available to purchase online from JM Bullion.

The Burnished ATB Silver Coins from the United States Mint have a unique visual brilliance in the collection. While the bullion coins have a shinier finish, the vapor blasting that is completed on the silver blanks used in the coining process results in a matte finish to the burnished versions of the coins.

On the obverse of all 2013 Burnished ATB Silver Coins is the image of George Washington. The first President of the United States of America, Washington led the Continental Army during the Revolutionary War and served for two terms in the highest office in the land.

The reverse side of 2013-P 5 oz Burnished ATB White Mountain Silver Coins. White Mountain National Forest is a federally managed region under the umbrella of the US Forest Service. The forest covers some 750,852 acres of land in the New Hampshire and Maine, and was established in May 1918.

The focus of the design on the ATB White Mountain Silver Coins is on Mount Chocorua. The mountain is part of the Sandwhich Range of mountains in the Appalachians and is the easternmost peak in the smaller range.