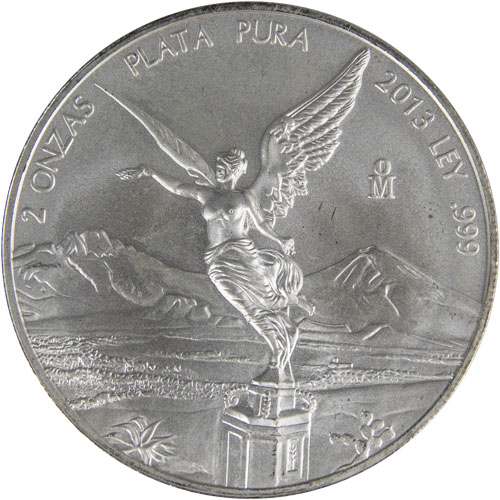 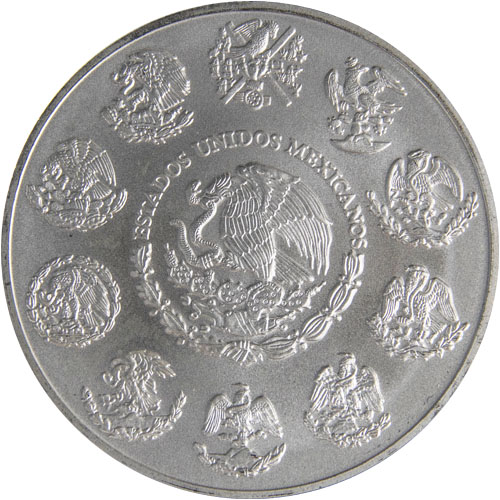 The 2 oz Mexican Silver Libertad Coin was first minted in 1996. While the coins have no specific denomination, they are considered legal tender. Its value is tied to the market value of 1 Troy ounce of silver. The Libertad Coin series – consisting of both gold and silver coins –  symbolizes and celebrates Mexico’s independence from Spain, which occurred in September 1821. In addition to the silver bullion coins, silver proof, reverse proof, and antique finish coins are minted for collectors. All sizes and versions are minted in .999 pure silver. JM Bullion currently has the 2013 2 oz Mexican Silver Libertad Coin available for purchase.

The 2013 Mexican Silver Libertad coin obverse depicts the current national Coat of Arms of Mexico. It features a Mexican golden eagle, standing atop a cactus, with a snake in its beak. Encircling it above are the words ESTADOS UNIDOS MEXICANOS and below are oak and laurel leaves. The current Coat of Arms is surrounded by 10 past versions of the official Coat of Arms of Mexico used throughout history. They also feature an eagle, quite often with a snake in its beak, and often standing on a cactus.

The Mexican Silver Libertad coin reverse depicts the Winged Victory statue in Mexico City in the foreground and 2 famous Mexican volcanoes – Popocatepetl and Iztaccihuatl – in the background. The Winged Victory statue commemorates Mexico’s freedom from Spain. Aztec mythology has a legendary love story between princess Iztaccihuatl and the brave warrior Popocatepetl, whom these 2 volcanoes are said to represent.

The Mexican Mint, or La Casa de Moneda de Mexico, is the official mint of Mexico and the oldest still operating mint in North America. The mint produces the Libertad coins in both .999 pure gold and .999 pure silver. The Silver Libertad has become a popular modern coin series among collectors, in part due to the high quality of the silver used to produce them and the traditionally low mintages of the coins. The Silver Libertad series started in 1982 with just the 1 ounce size. In 1991, mintage was expanded to include 1/20 ounce, 1/10 ounce, 1/4 ounce, and 1/2 ounce sizes. In 1996, mintage expanded yet again to include the 2 ounce and 5 ounce sizes. Finally, in 2008, a 1 kg size was added. All of these sizes are still offered today.

If you have any questions when you buy silver online, please contact our JM Bullion Customer Service team, as we are happy to assist you. We can be reached via phone at 800-276-6508, via our live chat, or via our email.