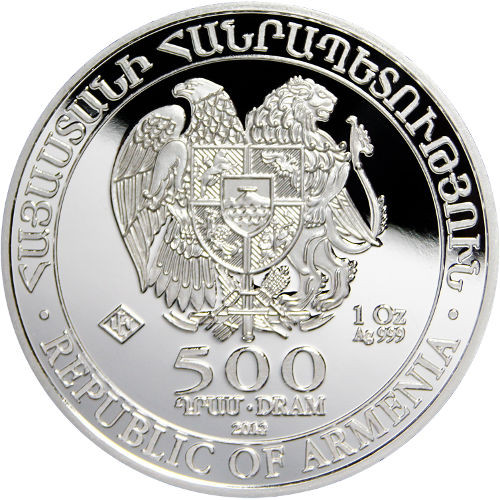 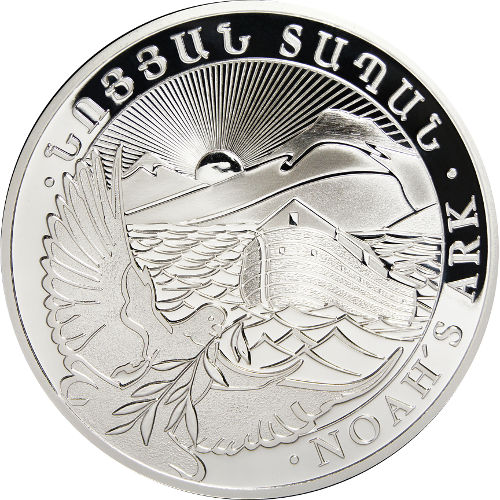 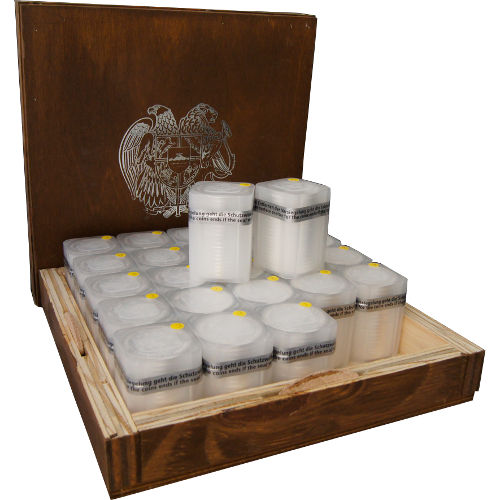 Please note that these coins ship in the exact condition as we receive them from the Geiger Edelmetalle Mint. We do not cherry-pick any coins for grading or purchase any second-hand material, so you can be sure the coins you receive will be in brand new condition and ship in mint-sealed tubes of 20. Non-mint lot quantities will ship in individual plastic flips. Unfortunately the wooden Geiger boxes are prone to cracking, and as a result we cannot promise that box quantities will ship in their mint wooden box.

The biblical tale of Noahs Ark offers a warning to mankind about the dangers of vice. After mankind had turned away from Gods guidance and fallen into sin, the creator sent an epic flood to cleanse the Earth of mans sin. In the story from the book of Genesis, Noahs Ark is the salvation of humanity. This tale is remembered annually on the Silver Noahs Ark coin. Today, you can purchase a 2013 1 oz Armenian Silver Noahs Ark coin from JM Bullion in brilliant, uncirculated condition.

In the Noahs Ark narrative, God comes to Noah and asks him to build in ark. In this boat, his family is offered salvation from the flood and told to save two of every species of animal on the planet. His family is tasked with building the ark and saving life on Earth for the world after the flood. The motif of Noahs Ark was chosen for the Armenian silver bullion coin because of its significance to the nation.

Armenia was the first nation in the world to officially adopt Christianity as a state religion. Further, Mount Ararat was within the borders of Armenian for much of human history. The resting place of Noahs Ark, Mount Ararat was removed from Armenian territory following the conclusion of World War I. When national borders were redrawn by the victors, Mount Ararat and its surrounding ground were transferred to Turkish control.

On the obverse side of each coin is the image of the Armenian coat of arms. Included in the image is the phrase Republic of Armenia, which is inscribed in both English and Armenian. The reverse side of the coin features the depiction of Noahs Ark as it floats on the flood waters. Mount Ararat is visible in the background, with the sun rising over its peaks. A dove bearing an olive branch is visible in the foreground.

If you have questions for JM Bullion associates, we welcome those inquiries on the phone at 800-276-6508, through our websites live chat, and via email.