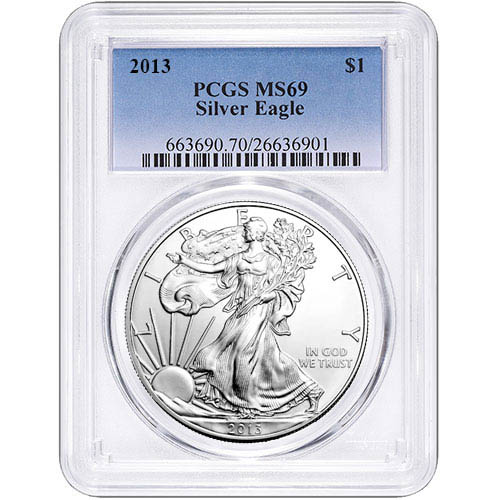 Record-breaking sales returned to the American Silver Eagle bullion coin series in 2013. After a downturn in 2013, the American Eagle silver bullion coin was set to go on a three-year run of record-breaking mintage figures. The first of those came in 2013. Now, 2013 1 oz American Silver Eagle Coins are available to you for purchase online from JM Bullion in near-perfect condition.

The final declared mintage of the 2013 American Silver Eagle was a new record at 42,675,000 coins. This was both a new record for a single year and the new second-highest year-over-year increase at almost 9 million coins more than the 2012 release of the coin. Demand for the Silver Eagles was so strong in 2013 that 3,937,000 coins were ordered on the opening day alone, setting a record for the highest one-day sales in program history.

Through the first 10 days of availability, the United States Mint would set a total of more than 6 million American Silver Eagles. The 2013 Silver Eagle release marked the first in a three-year run of record-breaking demand that would culminate with the existing record high of 47 million coins in 2015.

On the obverse of 2013 1 oz American Silver Eagles is Walking Liberty. This design features Liberty walking from right to left across the coin. Her pursuit of the sun on the horizon is meant to reflect Americas marched toward a brighter future.

The reverse side of 2013 American Silver Eagle coins features the modern heraldic eagle of the United States. The national symbol is set behind the US heraldic shield clutching an olive branch in one talon and the arrows of war in the other. Above its head are 13 stars arranged in a triangle and representative of the original colonies.

These 2013 1 oz American Silver Eagle coins have Mint State 69 grades from the PCGS. Coins in near-perfect condition have full, original mint luster and a maximum of two minor detracting flaws. These flaws are limited in nature to minuscule contact marks and hairlines.

We encourage JM Bullion customers to reach out to us with questions at 800-276-6508. Alternatively, you can interact with us online through our live chat service and email address.