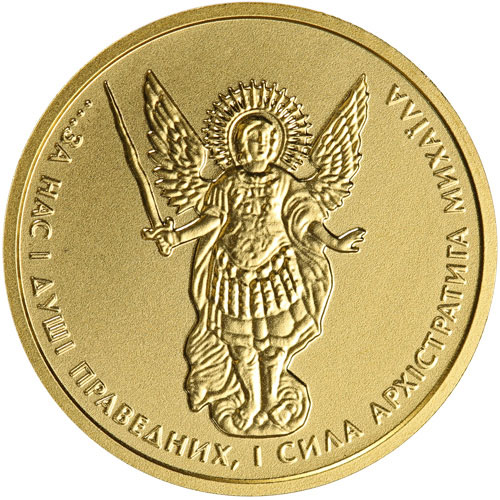 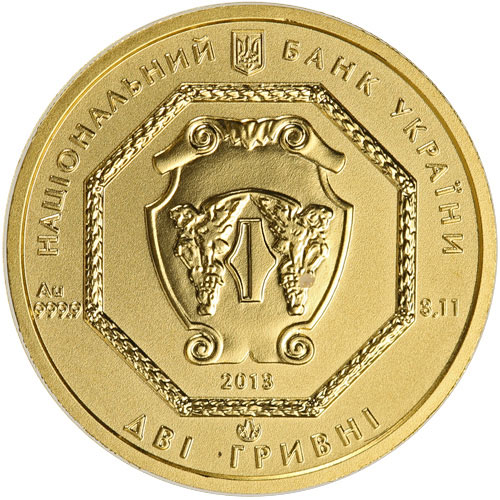 Each 2013 1/10 oz Ukrainian Gold Archangel Michael Coin in this product listing is in BU condition. Coins in this condition exhibit no signs of wear and tear, though you may notice a range of minor flaws including breaks in the luster, spotted surfaces, and contact marks from the coining process.

On the obverse of the 2013 1/10 oz Ukrainian Gold Archangel Michael Coin is the image of Saint Michael. The archangel Michael has been depicted in many different ways throughout the course of Western civilization. Although the National Bank of Ukraine has opted for the image of Michael with a full suit of Roman armor and a sword with outstretched wings, another popular depiction is that of Michael standing above the dragon with sword and spear ready to slay the beast.

The reverse side of the Ukrainian Gold Archangel Michael Coin includes the national coat of arms for the country of Ukraine. This side includes engravings in Ukrainian, as does the other side of the coin from the National Bank of Ukraine.

In recent years, the National Bank of Ukraine has expanded the Ukrainian Gold Archangel Michael platform to include a oz and these 1/10 oz coin. Debuting in 2012, these latter two fractional weights were initially quite popular. In recent years however, the oz has clawed its way back to the top as the most popular weight in the gold version.

Located in the national capital city of Kiev, the National Bank of Ukraine was formed in 1992 following the fall and separate of the states within the Soviet Union. Originally serving as a central bank for the region during Soviet occupation, the bank today serves the independent Ukrainian government in the production of paper currency and coinage for circulation, as well as commemorative precious metals.

We encourage JM Bullion customers to reach out to us on the phone at 800-276-6508. You can also connect with us online through our live web chat and email address.