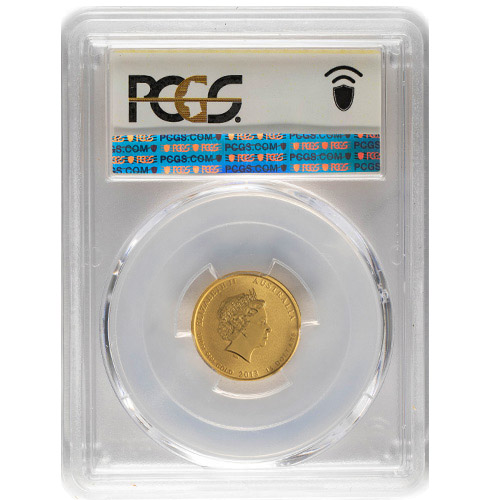 In 1996, the Perth Mint became the first mint in Australia to produce a Lunar bullion series. Series I ran for 12 years as it followed the Chinese calendar before renewing for series II in 2008. In this listing, you will find the 6th release in series II featuring the Year of the Snake! In addition, this specimen has received a perfect grade from PCGS, making it quite an appealing option for collectors of numismatic coins. Today, 2013 1/10 oz Australian Lunar Snake Gold Coins are available to you online from JM Bullion in certified perfect condition.

All 2013 1/10 oz Australian Lunar Snake Gold Coins in this online JM Bullion listing were sent to PCGS and received a perfect grade of Mint State 70. The coins themselves were struck at The Perth Mint and hold legal tender status in Australia. Upon arrival, your coin will be housed inside a protective slab that includes a label containing the official grade.

The Chinese calendar has attracted a global following thanks in large part to the Lunar animal aspect of its structure. Every year, the calendar features a new animal for 12 years before beginning the cycle again. According to custom, the traits associated with the animal in your birth year will correspond to your temperament. If you were born in the Year of the Snake, you may be determined, intuitive, and wise.

The obverse of 2013 1/10 oz Australian Lunar Snake Gold Coins features a portrait of Queen Elizabeth II. This is the fourth of six effigies of Her Majesty Australia has used for coinage. The portrait was released in 1998 and is credited to English sculptor Ian Rank-Broadley. Inscriptions are also featured on the obverse that read Elizabeth II, Australia, 1/10 oz .9999 Gold, 2013, 15 Dollars.

On the reverse side of 2013 1/10 oz Australian Lunar Snake Gold Coins there is a stunning Lunar snake design. The snake’s body is shown in a twisted shape with its head facing left. Other details include the Chinese zodiac symbol, the Perth mintmark, and the words Year of the Snake.

Please feel free to reach out to JM Bullion with any questions about these Lunar gold coins for sale. You can call us at 800-276-6508, chat with us live online, or simply send us an email.