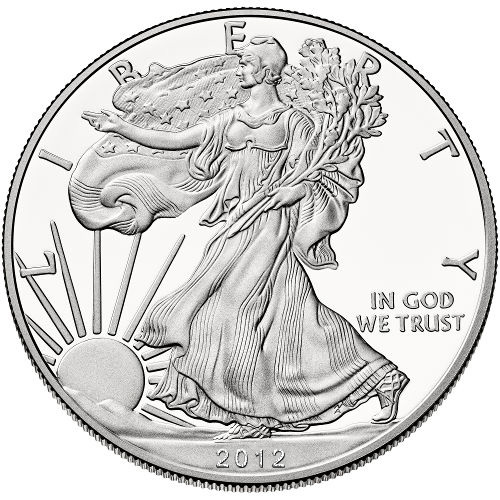 American Silver Eagle production may have been down slightly in 2012, but slightly is a relative term. After a then-record 40 million coins in 2011, the US Mint saw sales of 34.8 million American Silver Eagle coins in 2012. This type of drop is not surprising following an anniversary year, as the 20th anniversary year of 2006 was much higher than 2007.

The standard 2012-W Proof American Silver Eagle coin was struck with a total mintage of 877,731, which marks only a slight drop in production. The bullion coin was responsible for most of the drop, falling from 40 million in 2011 to 33.7 million in 2012.

On the obverse, as always, is the image of Walking Liberty. Created in 1916 by Adolph A. Weinman and featured on the Walking Liberty Half Dollar until 1947, it was one of the longest running coin designs in American history.

The reverse features John Mercantis heraldic eagle design, created in 1986. Mercanti assumed the post of Chief Engraver of the United States Mint in 1986, and remained there until his retirement in 2010.