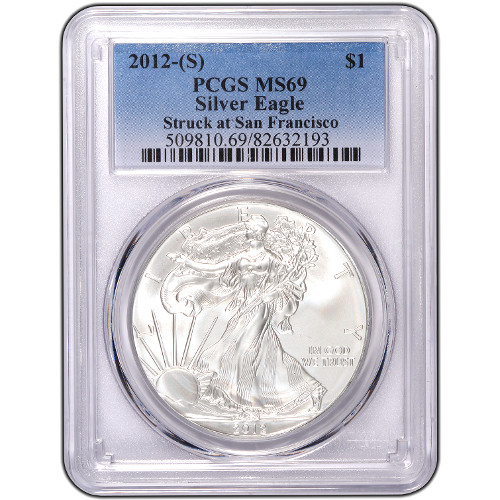 American Silver Eagle coins are among the most coveted with investors and collectors. The government-backed silver content and value of these coins is matched only by the splendor of their design, with classic images of Americana on both the obverse and reverse faces. Today, the 2012 (S) American Silver Eagle Coin is available with graded certification through JM Bullion.

Each 2012 (S) American Silver Eagle Coin available here today from JM Bullion is a near-perfect specimen according to the Professional Coin Grading Service. Coins in MS69 condition exhibit full, original mint luster, but also include a maximum of two minor detracting flaws on the surface such as miniscule hairlines or minor contact marks.

The American Silver Eagle coin debuted in 1986 with one of the nation’s most iconic coin designs on its obverse. Walking Liberty was created in 1916 by Adolph A. Weinman for use on the nation’s circulation 50-cent piece. His depiction of Liberty showcased America’s march toward a brighter future, with branches of olive and oak laurels depicting a desire for a peaceful future built upon the nation’s civic achievements.

On the obverse of all 2012 (S) American Silver Eagle Coins is the image of Walking Liberty. Weinman’s creation was on the Walking Liberty Half Dollar, as it is now known, from 1916 to 1947, and was actually one of two popular coin designs of his from the era. The other being the Mercury Dime.

The reverse of all American Silver Eagle coins includes the heraldic eagle of the United States. This design has featured on American coinage since 1794, but has been updated numerous times in the nation’s history. This particular iteration is from John Mercanti, Chief Engraver of the United States Mint from 1986 to 2010.

Originally struck in San Francisco, American Silver Eagles are now produced predominantly at the West Point Mint. However, intense demand for the coins has pushed the San Francisco Mint back into active production.

Please don’t hesitate to reach out to JM Bullion with questions. Our customer service team is available at 800-276-6508, online through our live chat, or via our email address.