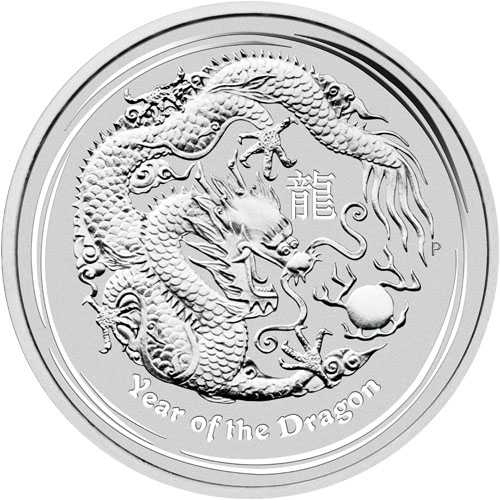 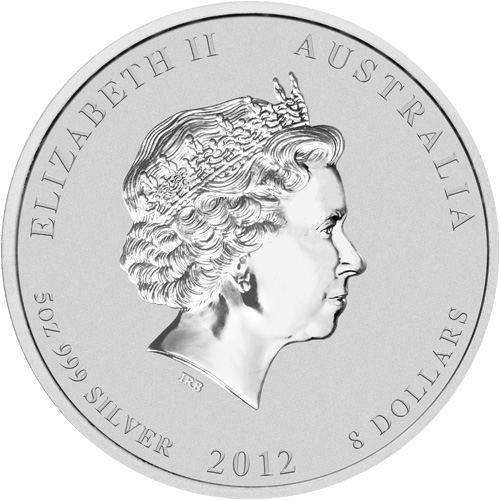 Each of the 2012 5 oz Australian Lunar Dragon Silver Coins available in this product listing come in Brilliant Uncirculated condition. The coins in this listing come in protective plastic flips. The Perth Mint issued an unlimited mintage when these coins were initially released, with the design retired at the end of the year, the declared final mintage was 31,664 coins.

The 2012 Year of the Dragon release in the Lunar Series II collection featured many of the weights now common to Lunar Series releases from the Perth Mint. In the silver bullion range, this consists of 1/2 oz, 1 oz, 2 oz, 5 oz, 10 oz, and 10 Kilo weights.

On the obverse side of the 2012 5 oz Australian Lunar Dragon Silver Coin is a depiction of Queen Elizabeth II. The Queen is shown in right-profile relief in this portrait with the Girls of Great Britain and Ireland Tiara on her head. Created in 1998 by Ian Rank-Broadley, this effigy of the Queen was used on British coins from 1998 to 2015 and featured on Australian coins from 1999 to 2019.

The reverse field of 2012 5 oz Australian Lunar Dragon Silver Coins includes a design exclusive to the Lunar Series II collection of coins. In this design, the Chinese dragon is shown slithering around the design field with the Chinese symbol for the dragon inside the circle its body makes as its front limbs reach out for the flaming pearl.

The Perth Mint was founded in 1899 as the third and final Royal Mint branch facility in Australia. Today, it is the oldest operating mint in Australia and operates independently of the Royal Australian Mint, the sovereign mint of Australia located in Canberra.

If you have any questions, please feel free to ask. JM Bullion customer service is available to assist you with any questions at 800-276-6508. You can also chat with us live online or send us an email with your inquiries.