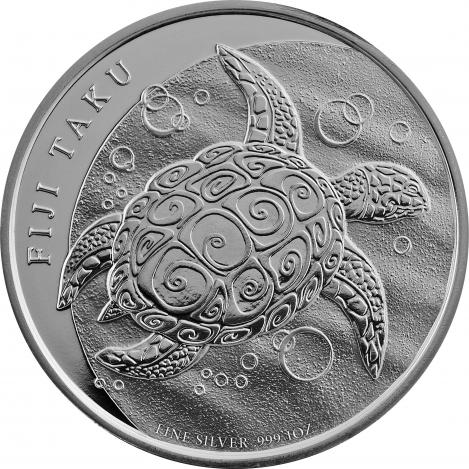 The 2012 New Zealand $2 Fiji Taku Silver Coin is now available in Brilliant Unciruclated condition, just as it appeared from the mint when it was first produced in 2012. Each coin has been authorized by New Zealand Mint and contains 1 troy ounce of .999 pure silver. The coins have also been assigned a $2 face value by the mint.

One of the most popular coins from the New Zealand Mint in recent years has been the 1 oz Silver Fiji Taku coin. The coins in this series pay homage to one of the South Pacifics rare and majestic creatures. The Taku, as it is called locally, is better known around the world as the hawksbill turtle. Hawksbill turtles get their name from their distinctive narrow, pointed beaks. However, it is the creatures colorful, overlapping scales on its shell that make it memorable when viewed in person.

Each year, the Taku migrate from their feeding grounds in the waters around Fiji to the shores of New Zealand to use the tropical beaches as breeding grounds. The Taku coin series is so popular that it spawned the subsequent New Zealand Silver Niue Hawksbill Turtle coin series, featuring the majestic creature in a different design.

On the 2012 1 oz New Zealand Silver Fiji Taku, the hawksbill turtle is featured on the obverse side of the coin. The turtle can be seen on the coin swimming through the bubbles in the waters of the South Pacific. Above the turtles image is an engraving that states Fiji Taku, while below is the engraving of the weight, purity, and metal content of the coin.

A right-profile image of Queen Elizabeth II, complete with crown, is featured on the reverse side of the coin. The Queens image is encircled by engravings that include Elizabeth II, Fiji, Two Dollars, and the year of minting.

The New Zealand Mint is a privately owned facility that operates in Auckland. It is not only the sole, private mint in New Zealand, but is also the only mint in the country. The facility purchases precious metals from suppliers around the globe to produce commemorative and circulation coinage for numerous countries in the region, including Fiji, Tuvalu, and the Cook Islands.

If you have any questions with regard to this 2012 New Zealand Fiji Taku Silver Coin or any of our other featured products, please give us a call at 800-276-6508. Our staff is conveniently available online through live chat or by email as well. We look forward to speaking with you and answering any questions you may have!

Marilyn from CA - June 14, 2016
"Bought 2 of these as gifts to commemorate our sons honeymoon in Fiji. They are simply stunning!"