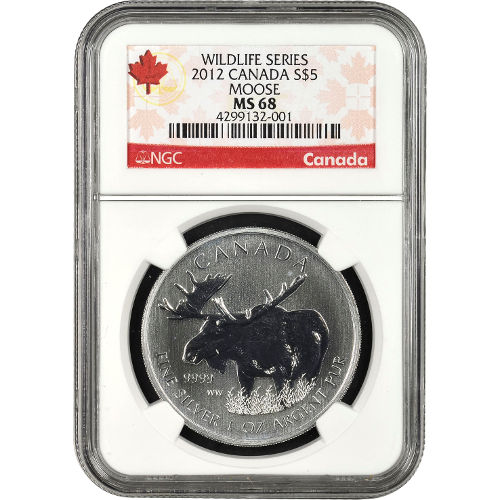 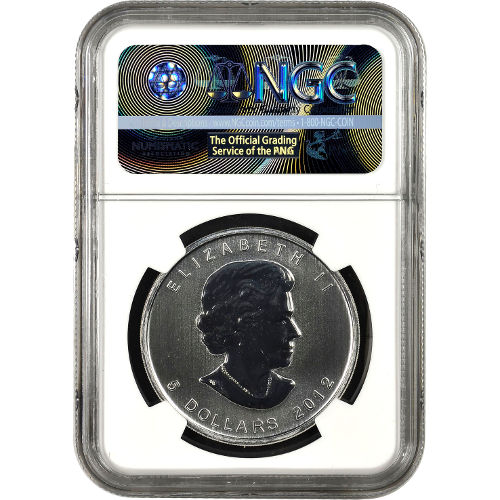 The final coin from the 2012 Canadian Wildlife Series was unique in that it marked a turning point in the design of the coins in the series. Famed Canadian artist Emily Damstra would eventually design the 2013 releases in the series, but the fourth coin would be the last designed by the Royal Canadian Mint’s Assistant Engraver, William Woodruff. JM Bullion proudly offers the 2012 1 oz Canadian Silver Moose Coin with NGC certification.

All 2012 1 oz Canadian Silver Moose coins available from JM Bullion today have a Mint State 68 grade. As the NGC notes, coins in this condition have an attractive strike with their full, original mint luster. You will find a maximum of three to four minor detracting flaws, which are often miniscule contact marks.

The Canadian Wildlife Series was a six-coin series from the Royal Canadian Mint. Each year of the course of three years the RCM released two new coin designs, one in February and a second in August. The 2012 Canadian Silver Moose was the fourth coin in the series.

On the reverse face is the image of a moose standing tall amongst the grass while it grazes. Generally viewed as docile creatures, their massive frame affords them great power and they will act aggressively if threatened.

The obverse of the coin bears the right-profile portrait of Queen Elizabeth II. England’s longest reigning monarch was captured in right-profile relief by Canadian artist Susann Blunt in 2003, and is featured on this side along with engravings of her name, the year of issue, and the coin’s face value.

The Royal Canadian Mint is one of the most technologically advanced facilities in the world. It was the first in the world to create a product with .99999 purity of the precious metal, and regularly produces some of the greatest bullion products in the world.

We encourage JM Bullion shoppers to reach out to us with questions. We’re available at 800-276-6508, online using our live chat, or via email.