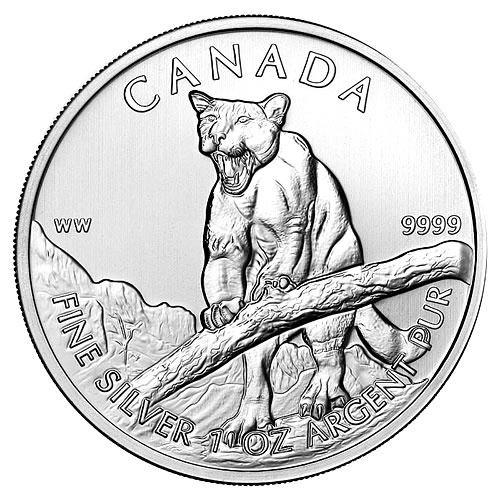 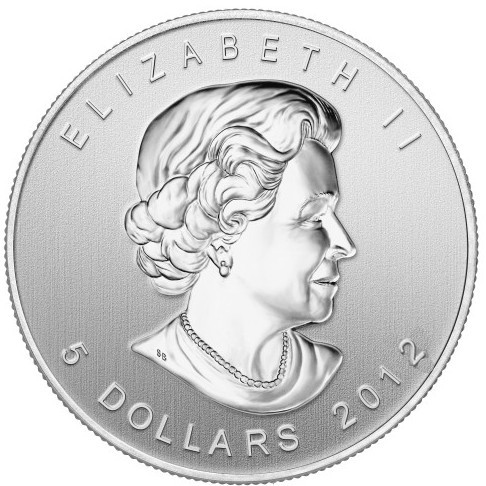 This 1 oz Canadian Silver Cougar coin was produced as the third release for the Royal Canadian Mint’s “Wildlife Series.” Each coin is composed of .9999 pure silver and weighs one troy ounce. These coins ship in brand new, Brilliant Uncirculated condition just as we receive them from the mint.

Canada is well known around the world as a modern society with massive stretches of land that remain wild and untamed. Symbols of Canada’s wilderness include the stunning Rocky Mountains, the massive bison, and the powerful cougar. The Royal Canadian Mint pays homage to the nation’s wilderness and wildlife on the 2012 1 oz Canadian Silver Cougar coin. Part of the wildlife series minted by the government in 2012, this coin features .9999 pure silver and the majestic image of a cougar.

The 2012 1 oz Canadian Silver Cougar is the third coin in the Royal Canadian Mint’s Canadian Wildlife Series. The cougar was minted as the third coin in the program and features the intricate design of a cougar on one side, with the right-profile image of Queen Elizabeth II on the opposite side. Collectors and investors can purchase the Canadian Silver Cougar, which has a face value of $5 CAD, in Brilliant Uncirculated condition.

On the obverse side of the coin, the powerful image of a cougar is featured. This wild cat is seen with its front paws on a fallen branch and its mouth agape, displaying its power and ruthlessness. The image includes several engravings, including the word “Canada” above the cougar, and the metal, purity, and weight engraved below.

On the reverse side of the coin is Susanna Blunt’s right-profile image of Queen Elizabeth II. Designed in 2003, Blunt’s image of Her Majesty is surrounded by engravings that include “Elizabeth II” above her head, as well as the face value and mint year below the Queen’s image.

The Royal Canadian Mint was first established in 1908 to help process and refine the gold that was coming from the Yukon Territories. Following the gold rush in the Yukon in the late 19th century and early 20th century, British rulers decided a new facility was needed to process gold in Canada. In the intervening years, the Royal Canadian Mint has produced the majority of gold bars Britain used to pay off World War I debts and mastered the minting of coins with unmatched purity, including .9999 fine silver.

If you have any questions regarding the 2012 Canadian Silver Cougar coin or any of our other products, please call us at 800-276-6508. For added convenience, you may also contact us via our online chat or by completing the online form.

Laura J from - June 21, 2019
"Oh dear this one needs some improvement. Realistically the cougar looks like none that I\'ve ever seen before, but you can\'t take away the facts that the coin is still .9999 pure silver and weighs one troy ounce. It\'s IRA Eligible as well. Its part of the series so I bought it."