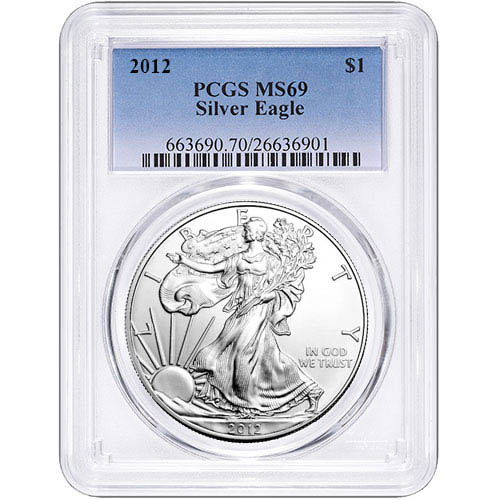 The 2012 1 oz American Silver Eagle coin may not have set a sales record, but its final mintage of 33,742,500 coins was still the third-highest mintage figure to this point in the programs history. Demand for the coins was so intense that in late 2011 the US Mint had reinstated production at the San Francisco Mint for bullion coins. The 2012 release marked the first full year of supplemental coining at the San Francisco Mint location.

All 2012 1 oz American Silver Eagle coins available to you here today come with PCGS certification. A Mint State 69 grade is assigned to coins with full, original mint luster and no more than two minor detracting flaws present. Acceptable flaws at this grade level include only minuscule contact marks or hairlines.

On the obverse of American Silver Eagles is the image of Walking Liberty. Her figure was originally featured on the US half-dollar coin from 1916 to 1947. The reverse of 2012 1 oz American Silver Eagles features the heraldic eagle of the United States. First used in 1794, this modern version of the seal was updated in 1986 by John Mercanti for this series.

Please feel free to reach out to JM Bullion customer service if you have questions. Were available to you on the phone at 800-276-6508, online using our live chat, and via our email address.