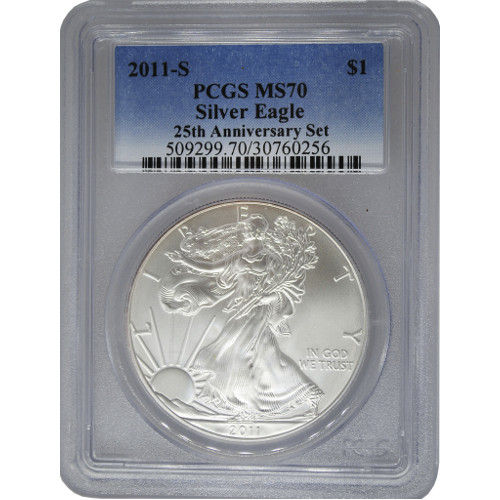 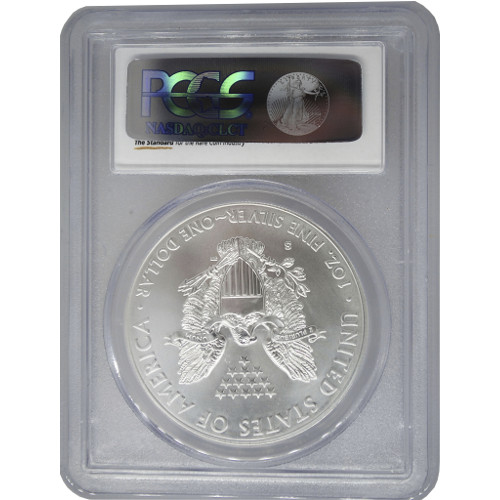 As one of the worlds most stringent certification services, the PCGS does not hand out a Mint State 70 grade lightly. Coins must possess full original luster, a sharp, attractive strike, and no contact flaws in order to receive the highest grade possible. Not only do these 2011-S Burnished American Silver Eagle coins possess the highest of grades, they are also from an extremely limited, one-time mintage of the coins at the San Francisco Mint.

The West Point Mint has handled production of all Burnished American Silver Eagles since the series began in 2006. As part of the American Eagle 25th Anniversary Silver Coin Set released in 2011, the US Mint offered a five-coin set featuring the bullion coin, proof coin, a reverse proof, the standard burnished coin from West Point, and this one-time striking of burnished coins from the San Francisco Mint.

On the obverse side of these coins is the image of Lady Liberty striding toward the setting sun with the American flag covering her shoulders. Designed in 1916 by Adolph A. Weinman, this image first appeared on the Walking Liberty Half Dollar. The reverse side bears John Mercantis heraldic eagle, as well as the S mint mark.

If you have any questions about this coin, a JM Bullion associate will be happy to help. Our team members are available at 800-276-6508, online using our web chat, and via email.