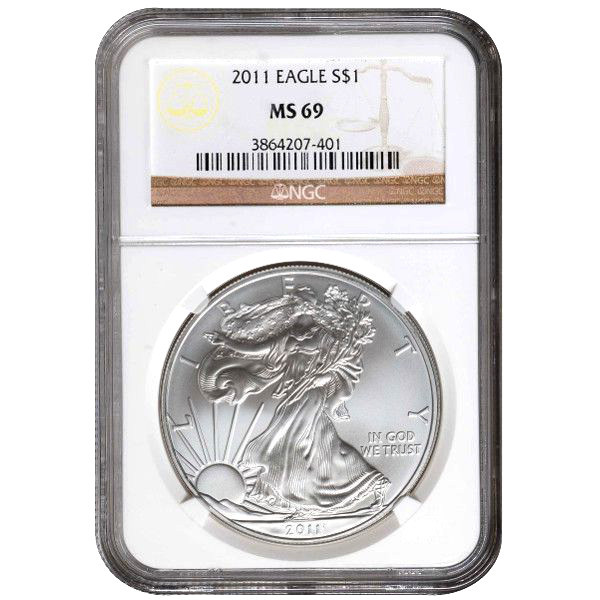 Coins that receive an MS69 grade from the NGC are certified to have full original luster, a sharp, attractive strike for the date and mint, and no more than two detracting flaws. The contact marks on an MS69 coin are not visible without magnification and are only found outside the primary area of focus on the coins surface. The 2011 mintage marked the 25th anniversary of the American Silver Eagle program.

Congress authorized the American Silver Eagle coin with passage of the Liberty Coin Act of 1985. The first coins went into production in 1986, with bullion and proof coins struck each year since (except the 2009 proof). Each American Silver Eagle contains .999 fine silver, has a face value of $1, and consists of only silver that was sourced from within the United States.

On the obverse side of the coin is Adolph A. Weinmans iconic Walking Liberty image. His image was originally introduced in 1916 and features Lady Liberty striding toward the setting sun with the American flag draped around her shoulders. The reverse side depicts a heraldic eagle, with arrows in one talon, an olive branch in the other, and 13 stars over its head to honor the American Colonies that fought for freedom.

The United States Mint consists of four primary production facilities. Of the four locations, only the Denver Mint is left out of the production process. The total mintage for 2011 American Silver Eagles was 40 million, but MS69 certified coins sell out fast.

JM Bullion welcomes all consumer inquiries. We invite you to direct your questions to our associates on the phone at 800-276-6508, online through our live web chat, or via email.