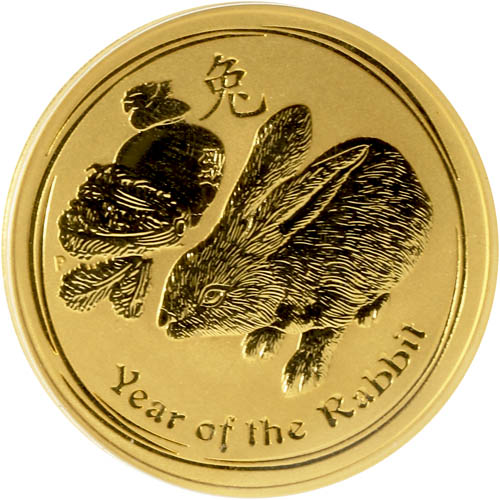 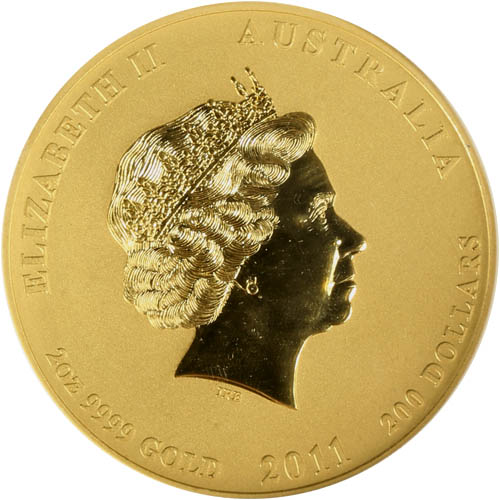 All Lunar Series II coins from the Perth Mint featured distinctive designs when compared to their predecessors in the Lunar Series I collection. The Year of the Rabbit arrived most recently in 2011 and in 1999 before that, appearing fourth in the Chinese lunar calendar in both occasions.

These 2011 2 oz Australian Gold Lunar Rabbit Coins are available to you with a protective plastic capsule to house the gold coins. The Perth Mint offers the gold coins in the Lunar Series II collection in a variety of weights, using unlimited mintage for all coins except the 1 oz and 10 kg options. However, this means the mint only strikes the coins through the end of the calendar year matching the date mark. The final declared mintage for the 2011 2 oz Gold Rabbit Coin was just 4,209 coins in total.

On the obverse of the 2011 Australian Gold Lunar Rabbit Coin is the effigy of Queen Elizabeth II. This is the fifth design of the Queen on Australian coins during her reign and was the fourth-generation image when designed for the Royal Mint of England in 1998 by Ian Rank-Broadley. This design appeared on all Australian bullion coinage from 1998 to 2018, with Lunar Series II coins maintaining the design for the final issue in 2019.

The reverse side of 2011 2 oz Australian Gold Lunar Rabbit Coins features the image of one rabbit next to a Chinese pot with a head of cabbage depicted on the ground nearby. This side of the coin bears the P mint mark of the Perth Mint within the design field.

Please dont hesitate to ask questions. JM Bullion customer service is available to help at 800-276-6508, online using our live chat, and via our email address.