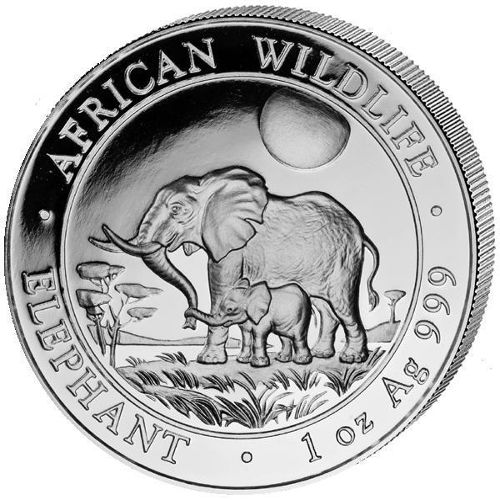 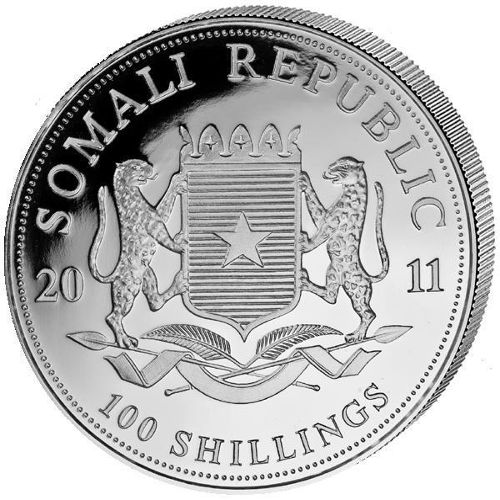 The African Wildlife coin series is one of the more popular in the world to feature native species from a specific region. Among the more readily available is the Somalia Silver Elephant. Calling attention to the plight of the African Elephant, the coins feature a new image of Africas bush elephant on the coins reverse side. Through this listing you can purchase a 2011 1 oz Somalia Silver Elephant from JM Bullion in brilliant uncirculated condition.

The origins of the Somalia Silver Elephant are disputed by unclear definitions of the coin programs official start date. Most recognize the first year of the series as 2004, when the first coins in the African Wildlife Series were introduced bearing the image of an elephant. However, Somalia Silver Elephant coins have existed since 1998. Regardless of the start date, these coins are all struck using .999 fine silver.

On the reverse side, a mother elephant guides her young calf across the open savannas of Africa. Tall grass is visible in the foreground; trees are featured in the background; and the sun rises high above the pair. The touching design of the coin displays the small calf grasping its mothers trunk with its own. The obverse side bears the coat of arms for the Republic of Somalia. Engravings on this side of the coin include Somali Republic, the year of minting (2011), and the face value.

The Bavarian State Mint, the oldest of Germanys five state mints, is responsible for production of the Somalia Silver Elephant. The Mint was founded in 1158 and is a state-owned enterprise of the Free State of Bavaria.

If you have questions about these Somalia Silver Elephants, please feel free to contact a JM Bullion associate. Were available at 800-276-6508, online using our live chat, or via email.

Laura J from - May 03, 2020
"The bond between mother and calf caught in a tender moment with peace all around. Beautiful luster and very fine delicate detailing. "