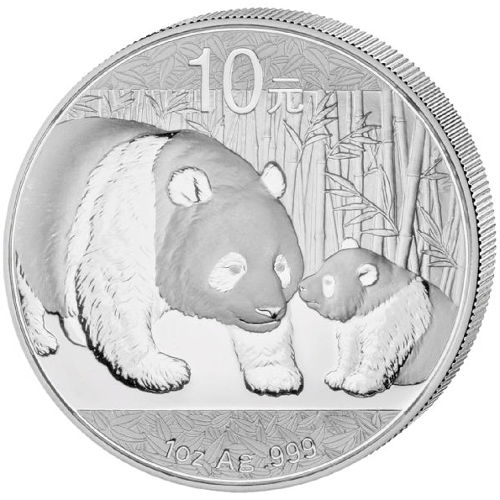 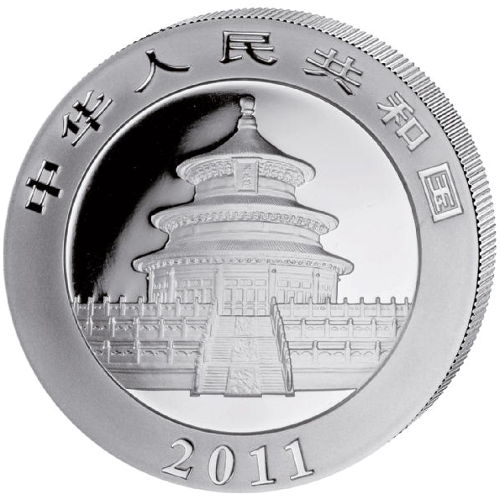 Over the course of more than 30 years of production, the Chinese Silver Panda coin program has unveiled a vast array of Panda themes on its popular silver bullion series. Only once in program history has a design been repeated, and this occurred in 2002 when the 2001 design was reused for a second consecutive year.

The Giant Panda is revered in China as one of the nation’s native species found only within the borders of the People’s Republic of China. Pandas inhabit the mountainous regions found in southern and central China, and are known around the world as unofficial symbols of the Chinese nation.

On the obverse of each 2011 1 oz Chinese Silver Panda coin you’ll find the adorable image of a mother with its young cub. The smaller cub is depicted sniffing at its mom’s face, as the now-standard wall of bamboo shoots frames the background of the design field.

The reverse of each coin in the Chinese Silver Panda series includes the design elements of the Temple of Heaven. Featured from the outside, this image of the 15th century temple and gathering place has been in use since the coin’s debuted in 1983.

All 2011 1 oz Chinese Silver Panda coins featured in this JM Bullion listing are Brilliant Uncirculated specimens. Coins with a BU grade feature no signs of wear and tear, however you will notice minor flaws such as breaks in the luster, spotted surfaces, or even contact marks from the production process.

Chinese Mint coins do not feature any mint marks, which makes it difficult to identify the mint of origin for any Chinese Silver Panda coins. The Chinese Mint operates various locations under the guidance and direction of the People’s Bank of China.

If you have questions, JM Bullion customer service team members can help. Contact us on the phone at 800-276-6508, online using our live web chat, and via our email address.