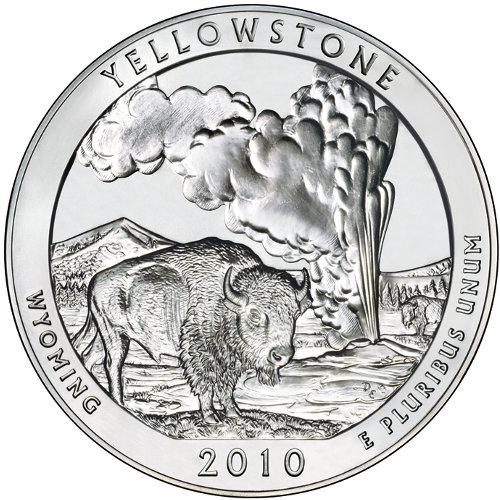 The second release of the inaugural America the Beautiful coin series is the 5 oz ATB Yellowstone silver coin. As part of a series of coins that began in 2010 and will run until after 2020, the 5 oz Yellowstone is as iconic a coin you will find on the market today.

Comprised of 99.9% pure silver and imagery that brings the coin to life, these coins are a catch for collectors and investors alike. With mintages just over 30,000/year, however, there aren’t too many around for you to get your hands on.

Produced by the storied US Mint, the America the Beautiful coin series was made to celebrate the many places and events that have helped shape this large, beautiful country. Though the theme of each series will vary, each and every coin will celebrate the United States of America in some way or another. The theme of the first ATB series are the many National Parks dotting the country.

Started as part of Theodore Roosevelt’s time as President of the United States, the National Park System is an aspect of the US that is absent from many other nations around the world. As larger populations of people began moving towards the Pacific coast through the latter part of the 19th century, a strange, but fervent need arose for us as Americans to preserve and celebrate the land that we call home. Through this urge came the foundations of the National Park System we know today.

Of all the National Parks in the United States, few are more well-known than Yellowstone, located in Southern Wyoming. Founded in the late 1870s, Yellowstone is not only one of the most popular National Parks, but also one of the oldest. With more than 3 million visitors annually and over 2 million square acres of land to explore, it is clear to see that Yellowstone is as massive as it is popular.

The reverse side of the 5 oz ATB Yellowstone silver coin features a stunningly lifelike image of an adult Bison standing in front of the park’s most popular geyser, Old Faithful. The park’s imposing mountains make up the background of the image, while inscriptions encircle the central depiction. Inscribed on the coin’s reverse are the words “Yellowstone”, “E Pluribus Unum”, and “Wyoming.” 2010, the year in which the coin was minted, is also inscribed into the coin’s reverse.

The obverse side of the 5 oz ATB Yellowstone is designed exactly like a US quarter. Complete with George Washington and all appropriate inscriptions, you will honestly have a hard time decipher the obverse of this coin with that of a typical US quarter dollar. In fact, even the coin’s face value, $0.25, is the same as a quarter.

If you have any questions or concerns about this or any of our other products, do not hesitate to get in touch with our helpful customer service staff. Customer support is available via live chat, email, or toll-free at 800-276-6508.