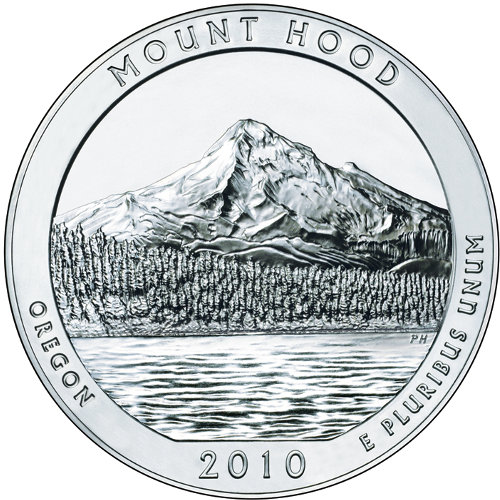 The fifth release of the America the Beautiful coin series is the 5 oz ATB Mount Hood silver coin. As part of a long line of coins celebrating the natural beauty of America, this piece sets itself apart from average silver coins through its breathtaking imagery and high purity level (99.9%).

Generally speaking, the America the Beautiful coin series was made with the history, beauty, and vastness of the United States in mind. Though the images on the coins change with each new release, every coin aptly celebrates some aspect of the United States that has helped shape the country we know today. The first series of coins celebrates the vast system of National Parks in the United States, but future series are likely going to have varying themes.

To talk about the origins of the National Park system of the United States, you have to go all the way back to the end of the 19th century when Americans began settling out West. As populations moved from the Eastern seaboard to the middle of the country and beyond, it was quickly realized that, in America’s vast expanses, there is some real natural beauty. In an effort to both boast this natural beauty and preserve it, President Roosevelt put the National Park system into motion.

Mount Hood National Forest, located in Oregon, is one of the most-visited National Parks in the United States. What’s more, the forest itself is more than 1 million acres in size, meaning there is plenty of room for exploring, camping, fishing, and hunting. On the reverse side of the 5 oz ATB Mount Hood silver coin, you will find a stunningly detailed image of Mount Hood rising out of the background, with a vast forest and docile-looking lake in the foreground. Though simple, the imagery does a great job of showing you just how massive Mount Hood National Forest actually is.

On the coin’s obverse, you will find inscriptions and imagery that exactly resembles that of the obverse side of a US quarter. Complete with a quarter-dollar face value and the profile image of George Washington, the 5 oz ATB Mount Hood coin is, in a lot of ways, a large, silver quarter.

If you have any questions at all, whether they be about the order process, more information on this product, or information on other products, feel free to contact our customer service department toll-free at 800-276-6508. There are also live chat and email options for those who may not want to or do not have time to talk on the phone.