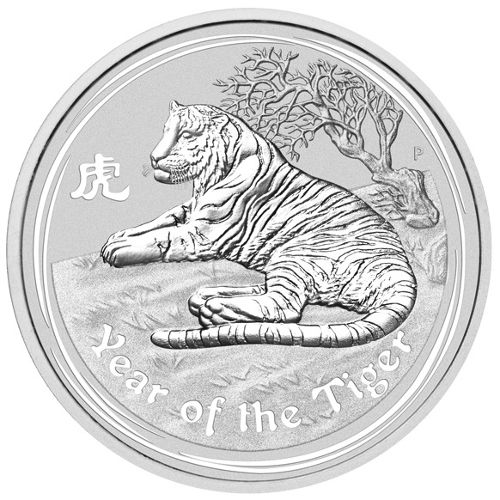 The lion might be the “King of the Jungle,” but the tiger is the largest cat species in the world. Projecting power and might with its 11-foot body length, these creatures are both majestic and fearsome. The overall beauty of these creatures is captured excellently on the Lunar Series II silver bullion coins from the Perth Mint. Right now, the 2010 1 Kilo Australian Silver Tiger coin is available from JM Bullion.

Lunar Series II coins are the popular follow-up series to the original Lunar Series coins introduced by the Perth Mint in 1996. Lunar Series II restarted promptly in 2008, following the 2007 conclusion of the first program. The cycle of coin production began with the Year of the Mouse, as it did for the original program.

On the reverse face of the coin is the image of a massive, majestic tiger at rest as it lays beneath a tree. Engravings on this face of the coin include the Chinese symbol for tiger, as well as the phrase “Year of the Tiger.”

The obverse bears that familiar right-profile portrait of Queen Elizabeth II. Designed in 1998 by Ian Rank-Broadley, this is the fourth-generation image of Her Majesty on British or commonwealth coins since she ascended to the British throne in 1952.

Australia’s Perth Mint is the nation’s oldest operating facility, having opened its doors in 1898. Today, it exists separately of the federal government’s Royal Australian Mint, and is owned by the state government of Western Australia. Perth Mint coins are considered legal tender under the Currency Act of 1965.

If you have any questions, please feel free to contact us at 800-276-6508. JM Bullion associates are also available online using our live chat and email features.

Thomas from IL - November 20, 2017
"I really appreciate the easy use of the website. The staff that I have spoken to have been very helpful. Delivery is very Prompt. The prices from what I have seen on the web are very competitive. I have dealt with JM many times and would recommend them to any one looking to buy silver or gold or coper. And probably other metals and products as well I just never bought anything else TA from IL"

Wade from ND - February 17, 2016
"A W E S O M E K I L O !!!!!!! Just received my Lunar TIGERS, they are even more impressive when they are in your hand. The DETAIL of these coins are OUTSTANDING, Thanks PERTH for such great coins. Will be looking forward to purchasing more from JMB, GREAT Service and fast. Thanks again ! ! ! A+++ Sunrise Kid lost in ND"