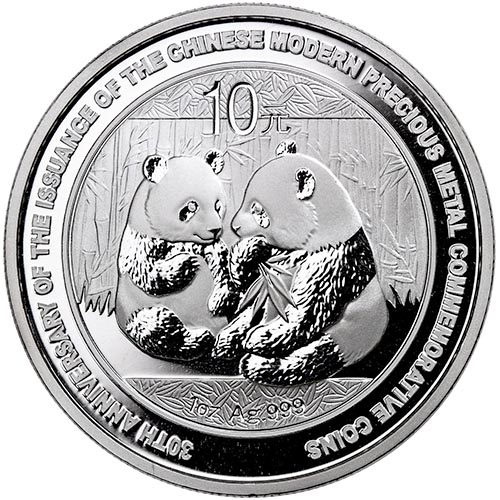 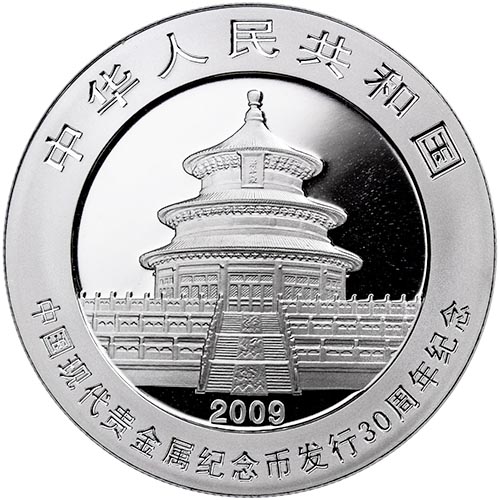 The Chinese Silver Panda is one of the most popular coins for investors and collectors. These beautiful coins have been available since an initial release of proof coins in 1983, and since 1989 as a silver bullion coin as well. In this listing you can purchase the special Chinese Silver Panda coin. The 2009 1 oz Chinese Silver Panda Coin commemorating the 30th anniversary of Chinese modern bullion is available to you online today from JM Bullion.

The 2009 release of Chinese Panda coinage included beautiful silver coins for sale that marked a special 30th anniversary for the Chinese Mint. In 1979, the mint launched a new series of modern bullion coins, with the panda featuring on some products. Since 1982, the Chinese Mint has offered a Gold Panda. Silver Panda coins debuted a year later in 1983.

Each one of these coins has a special engraving around the outside rim of the obverse side. Rather than the traditionally blank field, a special encirclement was added to the coins that features the engraving 30th Anniversary of the Issuance of the Chinese Modern Precious Metal Commemorative Coins.

On the remainder of the obverse of these 2009 1 oz Chinese Silver Panda coins youll find the image of two pandas sitting together. Looking at one another, the bear on the right is clutching a giant leaf in its hands and the background features a wall of bamboo. Other engravings include the face value, weight, metal content, and purity of the coins.

The reverse of the 2009 Chinese Silver Panda features the Temple of Heaven complex. The primary building within the complex is the Hall of Prayer for Good Harvests, which is featured prominently in this collection. Built between 1406 and 1420, the complex houses various Taoist religious buildings and is located in southeastern Beijing.

All 2009 1 oz Chinese Silver Panda Coins in this listing are in BU condition. Coins in this condition have no signs of wear and tear, but minor flaws are possible. As a result of the striking process, you may notice breaks in the luster, spotted surfaces, or contact marks.

The Chinese Mint operates four modern facilities located in Beijing, Shanghai, Shenyang, and Shenzhen. As it does not use mint marks, it is impossible to know where Chinese Silver Panda coins originate from specifically.

We encourage JM Bullion customers to contact us with questions. You can reach out to us on the phone at 800-276-6508, online using our live chat, and via our email address.