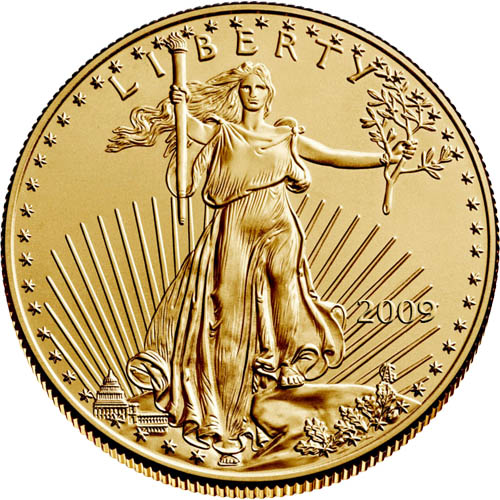 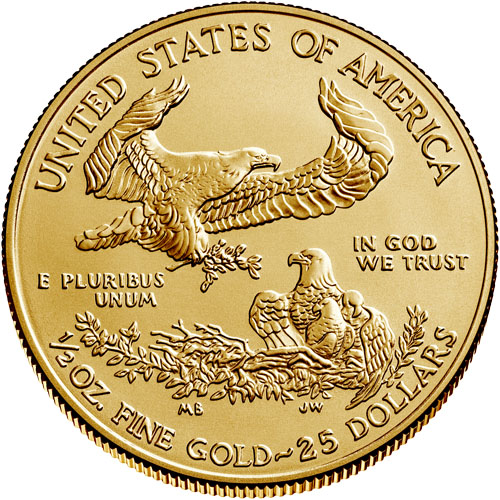 In 2009, global demand for precious metals caused production issues for the US Mint that altered both collector and bullion coin offerings. The one ounce version of the Gold Eagle was available most of the year, although it was subject to order rationing the first half of the year and again at the very end of the year. The fractional ounce Gold Eagles were available in limited quantities at the end of the year. The precious metals shortage also led to the US Mint canceling the planned collectible versions of both the Gold Eagle and the Silver Eagle in October. Currently, available for purchase from JM Bullion is a 2009 1/2 oz American Gold Eagle coin.

The obverse and reverse designs on the American Gold Eagle coins are the result of President Theodore Roosevelt’s sentiment that the US coins had become repulsive, artistically speaking. In 1904, without asking Congress, he retained the talented Augustus Saint-Gaudens to create a design that would return beauty to our US coins. The resulting Saint-Gaudens’ Lady Liberty creation appeared on the Eagle ($10) and the Double Eagle ($20) gold coins. It is a version of that Saint-Gaudens’ Lady Liberty that now appears on the American Eagle Gold coin.

The obverse of the 2009 American Gold Eagle coin features Saint-Gaudens’ Lady Liberty. It is a full-length figure of Lady Liberty, appearing to walk right off the coin at you. Her hair is flowing in the breeze behind her, and she is carrying a torch in her extended right hand while she carries an olive branch in her left hand.

The reverse of the 2009 American Gold Eagle coin features the Miley Busiek created a design that was sculpted by Sherl J. Winter. It symbolizes the importance of family in America. A male eagle, carrying an olive branch, is flying towards a nest with a female eagle and a couple of eaglets. It includes several inscriptions as well.

Have any questions? Our JM Bullion Customer Service team has the answers. We can be reached via phone at 800-276-6508, online using our live chat, or via our email address.