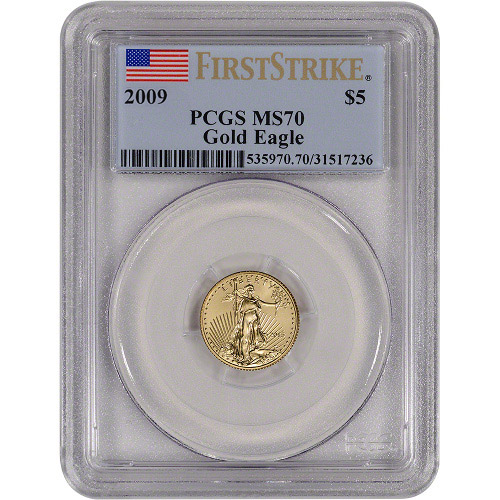 American Gold Eagle coins were first introduced in 1986 as the nations official gold bullion coin. Together with its silver counterpart, these coins are some of the most popular in the world. Produced annually by the United States Mint, these coins are struck in three versions and four weights. Today, the 2009 1/10 oz American Gold Eagle is available from JM Bullion.

American Gold Eagle coins were originally available in bullion and proof versions only. An uncirculated, or burnished, coin was introduced in 2006 on the 20th anniversary of the coin series introduction. Each year, the coins are struck in 1 oz, oz, oz, and 1/10 oz versions. These 1/10 oz coins are now the most popular weight in the program.

Each of the 2009 1/10 oz American Gold Eagle coins in this listing is available in perfect Mint State 70 condition. Coins in this grade have their full, original luster, and no blemishes, contact marks, or detracting flaws. The First Strike labels designate that the coins were received by PCGS within the first 30 days of the coins release.

The obverse design of all American Gold Eagle coins features Augustus Saint-Gaudens depiction of Lady Liberty. First created in 1907, Saint-Gaudens Liberty appeared on the $20 Gold Double Eagle from 1908 to 1933, and is considered by most to be the most beautiful coin design in American history.

On the reverse side of each coin is Miley Busieks depiction of a family of bald eagles in its nest. Her image was created in 1986 and is used solely on the American Gold Eagle coin.

These coins are struck by the United States Mint at various facilities, with the West Point Mint in New York responsible for the bulk of production each year. Contact a JM Bullion associate at 800-276-6508 with any questions. Were also available via our live web chat and email services. Looking for similar products? Be sure to check out our selection of Certified Gold American Eagle Coins.