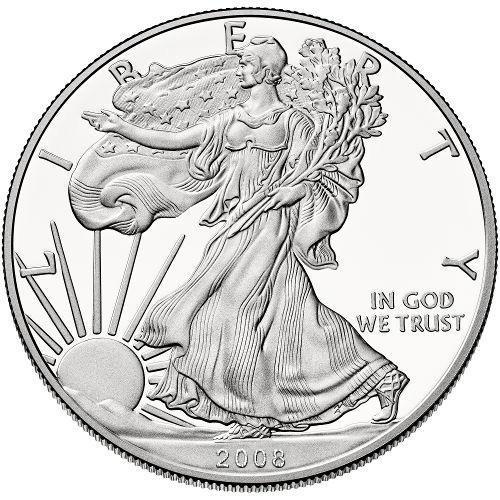 There may be no single year in the history of the American Silver Eagle coin program that was more tumultuous than 2008. The nation had just entered the Great Recession with the housing market collapse and subsequent panic on Wall Street at the end of 2007. As a result, the popularity of the program skyrocketed, but was bolstered largely by bullion coins. Today, the 2008-W Proof American Silver Eagle coin is available from JM Bullion.

American Silver Eagle coins were reaching all-time highs in production in the 2000s, and then the housing market crashed and took the American economy with it at the end of 2007. The crash itself hit the stock market hard, and the American economy shed millions of jobs as the nation tried to stop the bleeding.

In the midst of yet another economic crisis, the United States Mint saw demand for the American Silver Eagle soar to never-before-seen heights. Overall, 21.8 million American Silver Eagles were struck in 2008, which is the highest number in program history to date. However, much of this gain was in the bullion program.

After striking 9 million coins in 2007, the US Mint produced a new record high of 20.58 million bullion coins in 2008. While investors were running to precious metals, collectors were shying away. The 2008 Proof American Silver Eagle saw a drop in production of 121,000 coins. That was the largest single-year drop, not counting the drop after the 20th Anniversary Set in 2006, since the 1987 issue.

Adolph A. Weinman’s Walking Liberty continues to grace the obverse of the American Silver Eagle program today, while John Mercanti’s heraldic eagle is the standard bearer on the reverse. Weinman’s creation was originally designed in 1916 for the nation’s half-dollar coin, while Mercanti’s modernized heraldic eagle is exclusive to the American Silver Eagle.