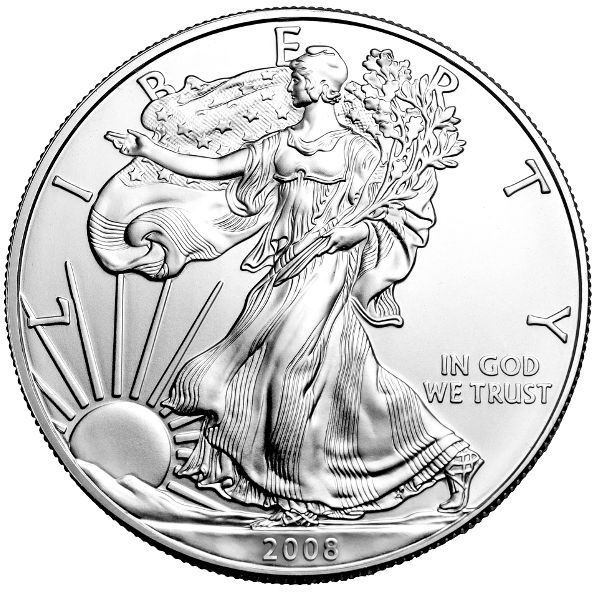 The 2008 American Silver Eagle coin broke a sales record that had stood since 1987, when the coin was in just its second year of availability. Sales of the American Silver Eagle in 1987 totaled 12.3 million coins, with 11.44 million bullion products. Those records stood for 21 years and took the onset of the Great Recession in 2008 to be broken.

2008 American Silver Eagle coin sales totaled 21.8 million coins, nearly double the total from 1987. Much of that growth was due to an immense surge in the demand for bullion coins, with mintage topping that of 1987 for the first time, reaching 20.1 million coins for the year.

The reason for the boost in demand in 2008 was two fold. With the onset of the Great Recession, there was a massive spike in the price of silver to an average price of $13.28 per ounce throughout the year, nearly double that of the prices during the early 2000s. This led to a surge in demand for precious metals, and the US Mint was even forced to suspend bullion coin sales midway through 2008, eventually reinstated sales with a rationed approach.

On the obverse of the coins is the image of Walking Liberty, created in 2008 by Adolph A. Weinman. This revered design first graced the U.S. half dollar coin in 1916. The reverse of the coin includes the heraldic eagle design from John Mercanti, who served as Chief Engraver of the United States Mint from 1986 to 2010.

If you have a question, JM Bullion associates are happy to help. You can reach us on the phone at 800-276-6508, on the web through our live chat feature, or via our email address. We also offer other years in the series so be sure to scroll through our inventory.