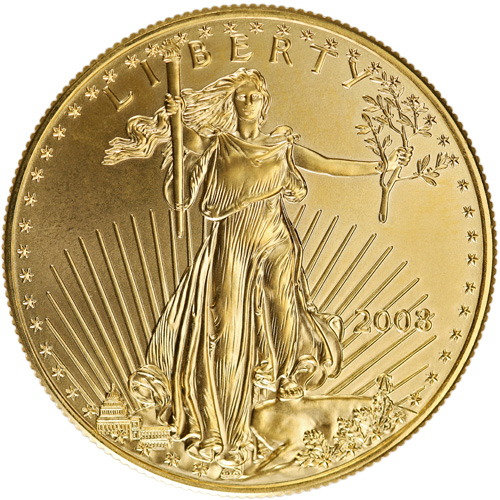 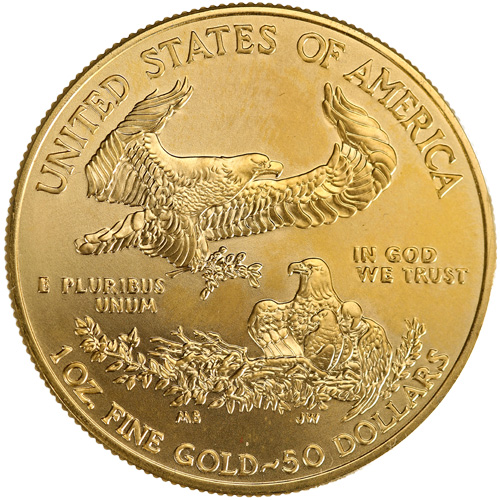 The American Gold Eagle coin experienced a resurgence in popularity and demand in the mid 2000s as the housing bubble burst in the US and the global economy descended into a massive recession. The coins are available in four weights and three versions, offering the perfect option for investors or collectors. The 2008 1 oz American Gold Eagle Coin is available to purchase today from JM Bullion.

American Gold Eagle coins feature the nation’s most iconic coin design of all time. Augustus Saint-Gaudens was contacted by President Theodore Roosevelt in 1905 to help lead a charge to revitalize all of America’s circulation currency designs.

Saint-Gaudens developed an image of Liberty in full-figure relief with the goddess walking toward the coin’s viewer. The original design included 46 stars to represent each of the states in the Union at the time of its striking in 1907. The Liberty design from Saint-Gaudens was developed in 1907 and used through 1933 on the $20 Gold Double Eagle coin.

On the obverse of the 2008 1 oz American Gold Eagle coin is the image of Liberty created by Saint-Gaudens. It features the image of Liberty walking forward with a torch in her right hand to guide the nation forward to an unknown future, with 50 stars around her to represent the current number of US states.

The reverse of the American Gold Eagle includes a design used exclusively on the coins in this collection. Designed by Miley Busiek in 1986, it features a family of nesting bald eagles with a female watching a group of hatchlings and a male flying overhead with an olive branch in his talons.

All 2008 1 oz American Gold Eagle coins offered here today are in BU condition. Coins in BU condition have no signs of wear and tear, though you might notice minor flaws ranging from breaks in the luster and spotted surfaces to contact marks from the production process at the mint.

We encourage JM Bullion shoppers to contact us at 800-276-6508. You can also connect with us online through our live web chat and email features.