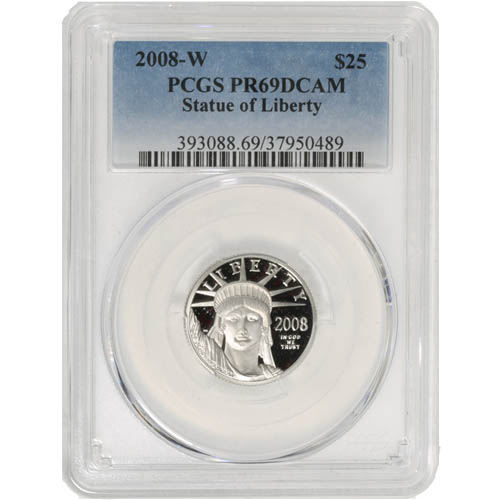 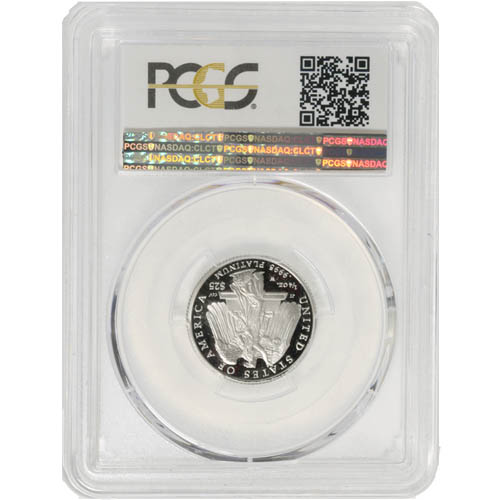 With your purchase of the 2008-W 1/4 oz Proof American Platinum Eagle Coin, you receive an item with a near-perfect certification from the PCGS. Coins in PR69 condition have full, original mint luster and a maximum of two minor detracting flaws. Those flaws are outside of the primary focal points of the coin and are limited in nature to minuscule contact marks or hairlines.

Also included with this coin is a DCAM designation. Known as deep-cameo, this designation points to the presence of strong, frosted design elements overlaying deeply-mirrored, clear background fields.

The obverse of 2008-W 1/4 oz Proof American Platinum Eagle Coins includes the image of the Statue of Liberty. This design was created in 1997 for this series by John Mercanti, the future 12th Chief Engraver of the United States Mint.

On the reverse side of 2008-W 1/4 oz Proof American Platinum Eagles is a depiction of Lady Justice. In this design, Lady Justice is watched over by the American bald eagle in a design representing the Judicial Branch of the United States federal government. The 2008 design release was the third and final coin design in the Foundations of Democracy series of images from the US Mint.

The 2008 release of the 1/4 oz Proof American Platinum Eagle coin was unique in that it is both the lowest mintage in the 1/4 oz platinum series and the last time fractional-ounce coins were issued. From 1997 to 2008, the US Mint issued both the bullion and proof coins in the Platinum Eagle Series in 1 oz platinum and three fractional-ounces. This ceased starting in 2009.