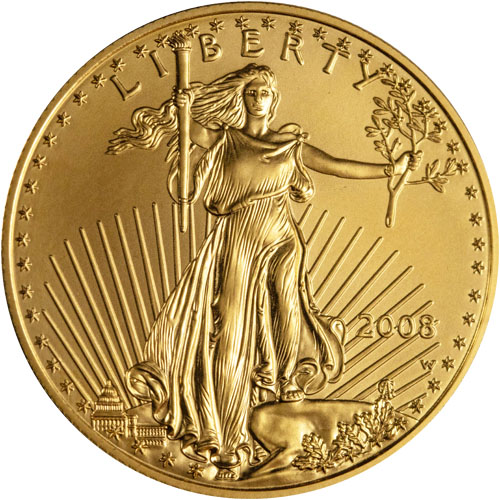 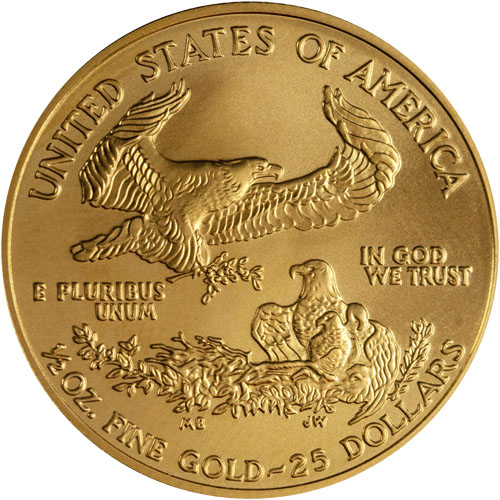 The global financial woes of 2008 had a significant influence on the sales of the American Gold Eagle coins. Sales in the first half of the year were representative of the previous several years. However, in July, a dramatic increase in sales actually forced the US Mint to suspend gold coin sales in August. And when sales resumed, coins were rationed. In spite of this, the 2008 mintage count for the 1/2 oz Gold Eagle was 61,000, an increase over the 2007 mintage number. JM Bullion currently has a 2008 1/2 oz American Gold Eagle coin available for purchase.

President Theodore Roosevelt was the prime mover behind the Lady Liberty that appears on the Gold Eagle coins. He had become disenfranchised with the looks of US coinage. He worked to retain the talents of Augustus Saint-Gaudens, to create a design that would return beauty to US coins. The result of that work is the Lady Liberty that now appears on the American Gold Eagle coin.

The 2008 1/2 oz American Gold Eagle obverse features the Augustus Saint-Gaudens’ version of Lady Liberty. It’s a full-length depiction of Lady Liberty, with her hair flowing behind her, appearing to walk straight out of the coin. Her right arm is outstretched carrying a torch and her left arm is out to her side holding an olive branch. Immediately to the left of her right foot is the Capitol building.

The 2008 1/2 oz American Gold Eagle reverse features the Miley Busiek design that was sculpted by Sherl J. Winter. The male eagle, carrying an olive branch in its claws, is flying above a nest with a female eagle and a couple of eaglets. It is meant to symbolize the importance of family in America.

Have any questions? Our JM Bullion Customer Service team has your answers. We can be reached at 800-276-6508, online via our live chat, or via our email.