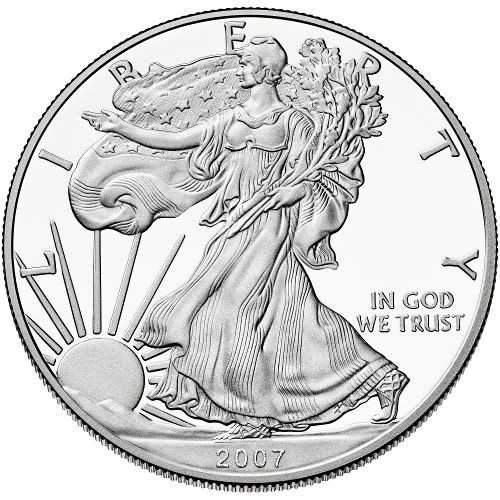 American Silver Eagle coin production was at previously unseen heights in the early 2000s. From 2000 to 2005, with just the proof and bullion coins available, the program averaged roughly 9.4 million coins struck annually. The introduction of the burnished coin in 2006 bolstered overall production levels, and proved popular in the short-term.

While proof mintage was down to 821,000 in 2007 from 1.09 million in 2006, much of that is a result of the increased production that took place amidst the hype of the 20th Anniversary of the American Eagle in 2006. Taken on the whole, the 821,759 coins struck in 2007 represents continued growth for the years 2002 to 2007. In fact, that stretch represents the longest single stretch of increasing annual production in program history at five years in total.

On the obverse face of the American Silver Eagle, the United States Mint dug back into the archives to polish up the Walking Liberty design. First used on the Walking Liberty Half Dollar from 1916 to 1947, the design was from Adolph A. Weinman and is recognized as one of the pivotal coin designs from America’s Golden Age of currency design.

The reverse bears a heraldic eagle design from then-Chief Engraver of the United States Mint, John Mercanti. His depiction is modernized from the one that has appeared on American currency since 1794, and includes 13 five-pointed stars above the design to represent the American colonies.

Please direct any questions you have to a JM Bullion associate. You can reach us on the phone at 800-276-6508, connect with us online using our live chat, or email us.