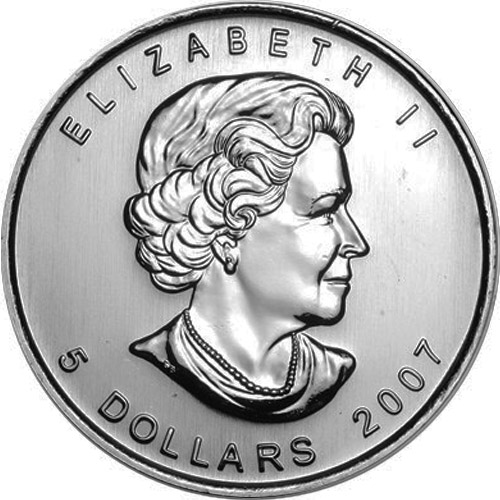 Following a trend that saw many silver coins experienced in the mid-2000s, the Canadian Silver Maple Leaf was up in mintage for a third straight year and broke a sales record for the first time in its history with the 2007 release. However, it would be just the first of many records broken as silver prices surged higher with each year. The 2007 1 oz Canadian Silver Maple Leaf Coin is available to you for purchase online from JM Bullion.

Prior to the release of the 2007 1 oz Canadian Silver Maple Leaf coin, these 1 oz silver bullion coins had hit a high mintage mark in 1989 at 3.332 million coins. It is not unheard of for coins to hit their greatest highs in the second year of availability, which to this point was the case for the Silver Maple Leaf following its 1988 debut.

Powering the rising mintage figures for the Canadian Silver Maple Leaf coins was the price of silver. As recently as two years prior, the price of silver averaged around $8.00 per ounce throughout the year. However, that figure had been increasing dramatically, with 2007 seeing silver prices average $13.29 per ounce throughout the year, driven in large part by the onset of the Great Recession.

The obverse of Canadian Silver Maple Leaf Coins includes the right-profile portrait of Queen Elizabeth II. Her Majesty is found on the obverse of all Canadian coins, and by 2007 the design was that of Her Majesty created in 2003 by Susanna Blunt.

On the reverse of the 2007 1 oz Canadian Silver Maple Leaf Coin is the sugar maple leaf. Designed by Walter Ott, this image of the national emblem is found on all metallic versions of the Canadian Maple Leaf coins.

We encourage JM Bullion customers to reach out to us with questions at 800-276-6508. You can also connect with us online through our live chat service or email address.