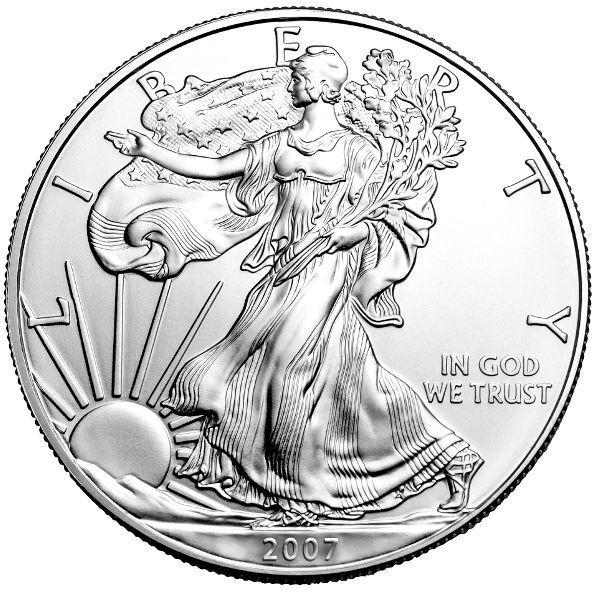 The 2007 American Silver Eagle featured the first regular production of burnished, or uncirculated, Silver Eagle coins. Struck with special care, that included using burnished blanks and hand-loaded coining processes, the burnished American Silver Eagle was introduced in 2006 to celebrate the 20th Anniversary of the American Eagle. Starting in 2007, it made its debut as a regular offering from the US Mint.

Production of American Silver Eagle coins in 2007 was high across all three versions, with 9.02 million bullion coins, 821,000 proof specimens, and 621,333 burnished coins. A selection of the 621,333 2007 Burnished American Silver Eagle coins were sold as part of the Annual Uncirculated Dollar Coin Set, which featured a 2007 Sacagawea Dollar and four of the 2007-dated Presidential Dollars.

Although the bullion and proof mintage levels did not set a record, the burnished 2007 American Silver Eagle mintage remains the highest in the history of the uncirculated version of the coins.

On the obverse, Walking Liberty appears in brilliant left-profile relief as she strides toward the setting sun in the distance. The reverse bears John Mercantis heraldic eagle design, an image he modernized in 1986 for use on the American Silver Eagle.

Please direct your questions regarding the 2007 American Silver Eagle or any of our other Silver Eagle coins to a JM Bullion associate at 800-276-6508. You can also connect with us online using our live web chat and email features.