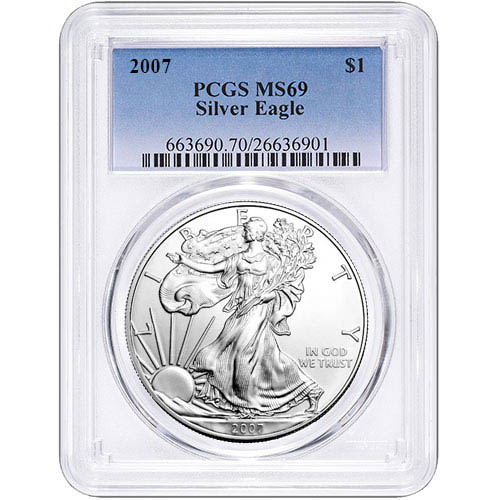 Coming off of its 20th-anniversary release, the American Silver Eagle coin experienced a dip in demand. The mintage of 2007 Silver Eagles experienced a double dose of tough news coming off the anniversary year with silver settling in at new highs almost double the average silver prices in recent years. Now, 2007 1 oz American Silver Eagle Coins are available to you to purchase online from JM Bullion in near-perfect condition.

During 2007, silver traded at an average price per ounce of $13.28. Much of this was the result of a massive recession that set in on markets around the globe. It was driven, in part, by a housing and mortgage crisis in the United States that crippled lending and put many homeowners on bad footing.

As a result of these varied factors, demand for the 2007 American Silver Eagle sunk compared to the 20th-anniversary release the year before. The total mintage declared by the US Mint for 2007 Silver Eagles was 9,028,036. This marked a decline of 1.6 million coins from the prior year. However, as the Great Recession set in deeper in the years to come, 2007 would prove a blip on the radar.

On the obverse of 2007 1 oz American Silver Eagles is the image of Walking Liberty. This popular design element was created in 1916 by Adolph A. Weinman for the nation’s circulating half-dollar coin. The reverse side of 2007 American Silver Eagle Coins includes the design of the heraldic eagle of the United States as modified by John Mercanti in 1986.

These 2007 1 oz American Silver Eagle coins come to you with a Mint State 69 certification. Coins in this condition are considered near-perfect with full, original mint luster and no more than two minor detracting flaws. These flaws are limited in nature to minuscule contact marks and hairlines only.

We encourage JM Bullion customers to call us with questions at 800-276-6508. You can also connect with us live online through our webchat or send us an email.