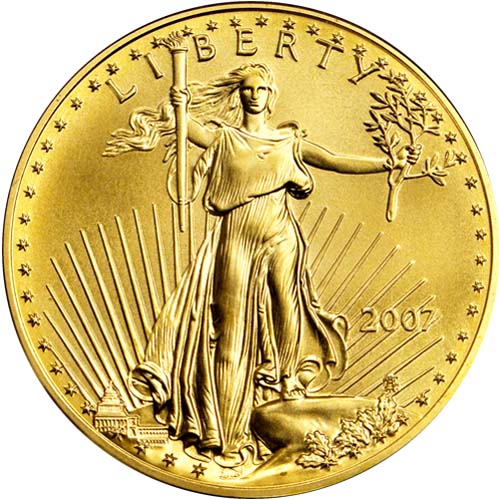 The American Gold Eagle coin has bounced up and down in terms of both demand and mintage. The coins were originally struck in the first two years in figures surpassing the one million mark for the 1 oz coins. American Gold Eagle coins wouldn’t hit those highs again until the late 1990s delivered an economic slowdown, slumping US Dollar, and uncertainty over Y2K.

On the obverse of the 2007 1 oz American Gold Eagle is Augustus Saint-Gaudens’ Liberty design. Created in 1907 at the behest of President Theodore Roosevelt, this design helped launch sweeping changes in the design of American coins and eventually became the single most popular US coin design of all time.

The reverse of the 2007 1 oz American Gold Eagle depicts a family of nesting bald eagles. The male is featured flying overhead with an olive branch in its talons, while a female stands vigilant watch over the family nest that contains a group of hatchlings. This design was created by Miley Busiek in 1986.

Please don’t hesitate to ask questions about the American Gold Eagle. JM Bullion customer service team members are available at 800-276-6508, online using our live web chat, and by sending us your questions in writing at our email address.